Holiday shopping is just around the corner, like soo close that we can almost taste it! I know it is a bit freaky to think about but don’t worry because we have you covered! There is so much that is new from Hasbro that you are going to love all the options you and your kids have to pick from! Recently there were 6 new toys revealed that I think you are all going to love! 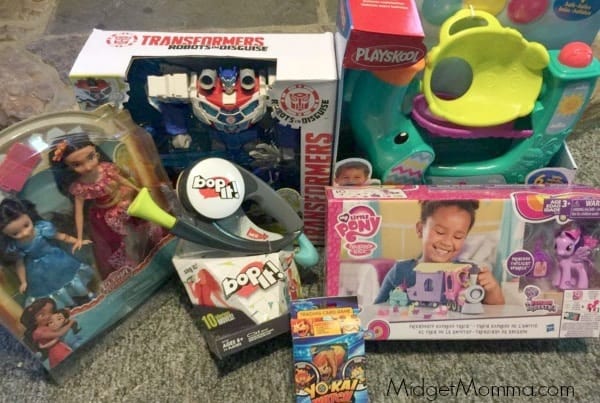 Get little ones moving and giggling with air-powered, unpredictable fun! With its slim design and ball storage, the Chase ‘n Go Ball Popper toy packs whole-body play into a compact size. This active toy for babies and toddlers features multiple ways to play and helps encourage a variety of developmental benefits. Kids can practice their gross motor skills by sitting or standing to place the balls in the toy. Pressing the big button to start the 6 tunes and ball popping can help them explore cause and effect. When it’s time to change things up, switch the poppin’ fun with an easy turn of the elephant’s trunk. When the trunk faces toward the elephant, the balls will continuously cycle through the toy, which can help encourage baby’s eye tracking. Turn the trunk away from the elephant to help encourage gross motor skills through race ‘n chase fun as the balls launch around the room! Kids can practice making predictions as they figure out where the balls will land next, and the music is sure to keep them moving and grooving again and again!

Imagine taking Princess Twilight Sparkle on a scenic trip aboard the My Little Pony Explore Equestria Friendship Express train! An engine car, train car, and caboose each have rolling wheels that keep this My Little Pony Friendship Express Train rolling with fun! The Princess Twilight Sparkle pony figure looks adorable in the conductor hat and glasses accessories, and the train car opens to play out fun stories inside and out. Pretend to serve passengers drinks, load the caboose with luggage, and pass out paper tickets. The caboose roof opens, and when play time is over it closes to hold the 10 included accessories. Also look for other My Little Pony figures to add to the fun! (Each sold separately. Subject to availability.)

My Little Pony and all related characters are trademarks of Hasbro.

In the Transformers: Robots in Disguise animated series, Bumblebee leads a team of Autobots. Their mission: capture Decepticons who are loose on Earth … and do it without being discovered. Join Bumblebee and his team and help them chase down Decepticons with Transformers: Robots in Disguise figures!
Includes Power Surge Optimus Prime figure, Mini-Con Weaponizers Aerobot figure, sword accessory, demo battery, and instructions.

Twist it! Bop it! Answer it? Selfie it? Hammer it? This updated Bop It! game is enhanced with new action-oriented Bop It! moves for today’s modern gamer. Bop It! game uses move it motion technology to test players and see if they’ve got the skills to master Bop It! game. The ten moves are: whip it, drink it, selfie it, hammer it, answer it, cradle it, saw it, sing it, golf it, and comb it. The Bop It! game is a portable game for on-the-go fun. It features 3 solo and social play options: Classic, Beat Box, and Pass It. For one of more players.

•Updated with 10 fun moves, including whip it, cradle it, and sing it
•3 exciting modes
•Each mode offers solo or group play

Elena of Avalor is the adventurous Crown Princess

In the world of Yo-kai, mysterious beings are responsible for making all kinds of strange things happen during the day. Spill a drink, lose a sock, or have a silly argument with a friend? It’s probably because of a Yo-kai! Collect, battle, and trade favorite Yo-Kai Watch characters with this Yo-kai Watch Trading Card Game Blazion and Komajiro Starter Pack. Now beginner players as young as 6 can get in on the Yo-kai Watch action. The ready-to-play deck has what one needs to start, and the rules explain how to play the trading card game step by step. This pack also features 2 exclusive Yo-kai Medals. Kids can have a blast playing, collecting, and trading the Yo-kai Watch Trading Card Game (Additional cards sold separately.)

I am sure we will be seeing a lot more awesomness coming fromHasbro and as soon as I hear anything I will be sure to let you know!

Disclaimer: This post is sponsored by Hasbro. All opinions are 100% my own.