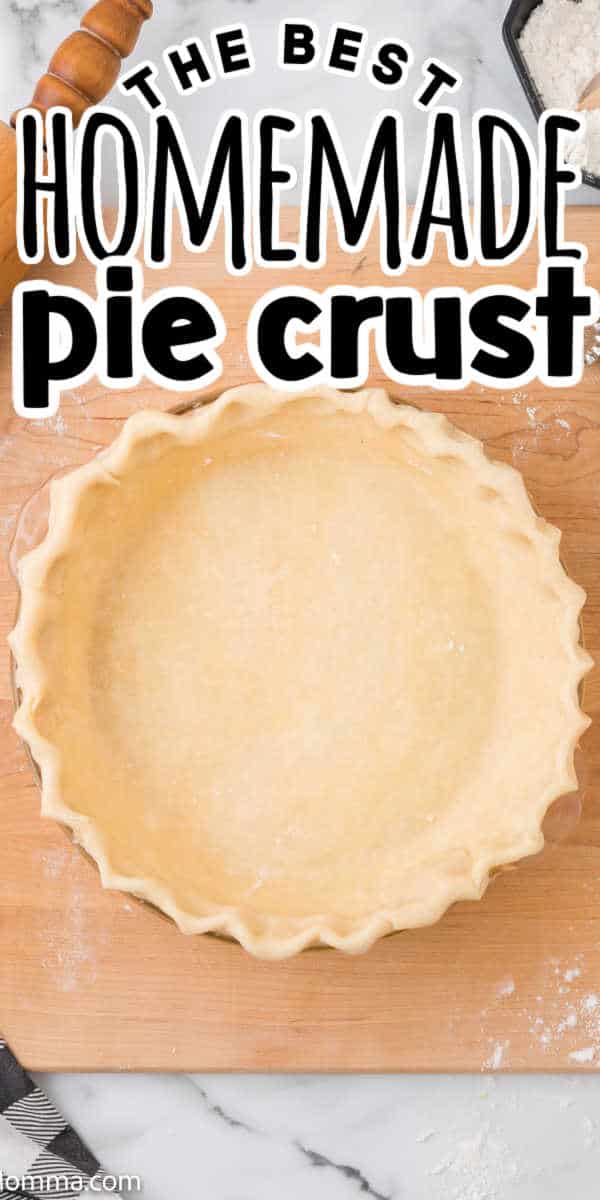 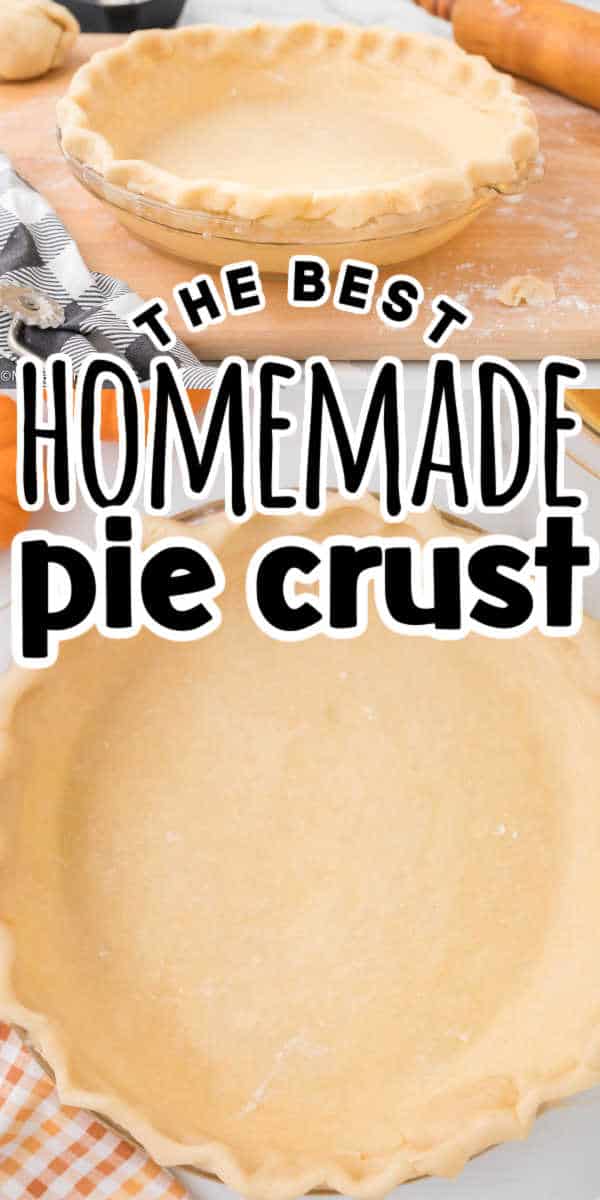 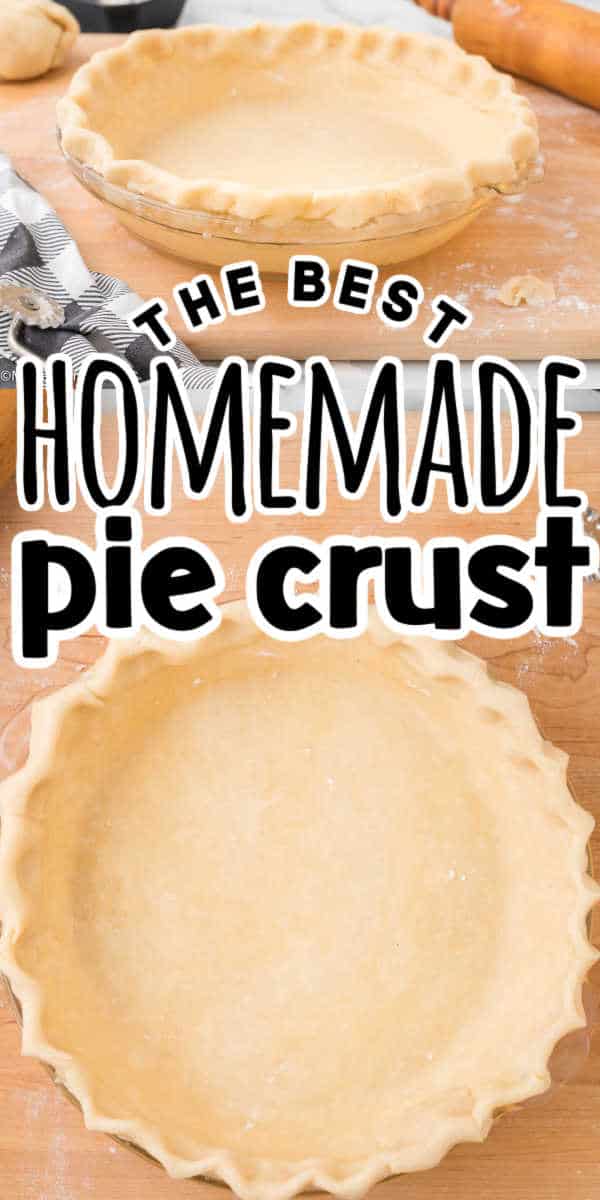 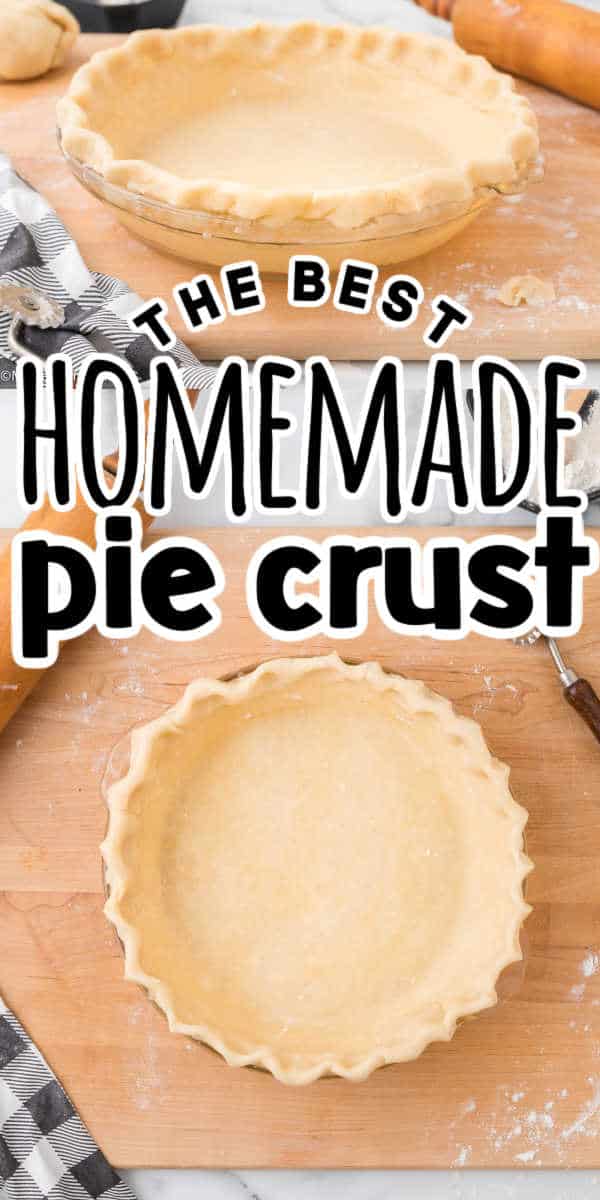 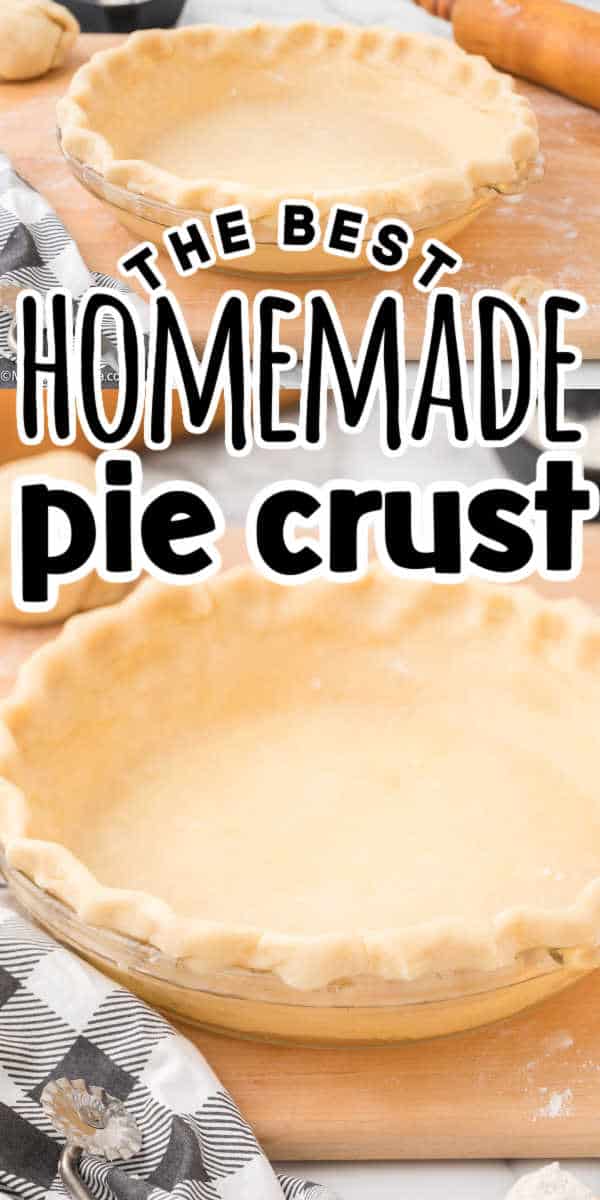 Buttery, flaky crust is what makes the perfect pie and these step by step direction for how to make homemade pie crust will give you the BEST one ever! Seriously once you make this homemade pie crust recipe you will never grab a pie crust at the grocery store again!

For years I grabbed the store bought crust from the refrigerator section of the grocery store. Then I learned how to make my own and it has now been years since I have bought any at the grocery store. I wish I had done this sooner, but I refuse to beat myself up over how silly I was for thinking that I could not make my own.

To be honest I was totally intimated about making my own. I don’t know exactly why, but I had it in my head that it was super hard to make and that I would mess it up. Yes I know that sounds totally silly as someone who bakes and cooks all the time and makes so many things from scratch but the idea that it was scary was stuck in my head.

If you have never made a pie crust, you are going to love making this easy homemade pie crust and I am sure you will be using it for all of your pie making needs!

This easy recipe makes a flaky pie crust that is great for making homemade pies, both dessert pies, and savory pies.

What to make with Homemade Pie Crust

Making your own pie crust might be a scary thought, but once you learn the basics it is very simple to make your own at home and you will never go back to the store bought.

If you want to make your apple pie fancy you totally can easily too! Just check out how to make Lattice Pie crust Apple pie  and how to make the best egg wash for apple pie!

Be sure to also check out the tips on how to make the perfect pie!

How many Pie crusts does this Easy Homemade Pie Crust recipe make?

Can I make Pie Dough in Advance?

Yes! You can make the pie crust ahead of time and store either in the fridge or freeze it to use later. It is important that when you store the pie crust it is wrapped well in plastic wrap and then stored in a zip close bag with the air squeezed out.

Once you have made the pie crust you can store it in the fridge for up to 3 days or in the freezer for up to 3 months.

Can I Make Pie crust ahead of time and Freeze pie crust?

Yes! One of the great things about making homemade pie crusts is that you can make multiple pie crusts, and then freeze them to use when you need them.

I like to do this when I know that I am going to be making multiple pies, it saves me a lot of time when I am making a lot of pies at once. It also makes it much easier for me to have less mess to clean up on the days that I am making pie crust.

How to Freeze homemade Pie Crust

Make your pie crust following the directions up until the rolling the pie crust in to a ball.

After rolling each one into a ball, wrap the pie dough tightly with plastic freezer wrap or heavy-duty aluminum foil.

Then place the dough into a heavy-duty freezer bag and zip closed making sure to remove any air from the bag.

You can also freeze the pie crust in the pie pan. I suggest using the tinfoil pie tins if you are going to freeze pie crusts this way.

Follow all of the steps for how to make a pie crust and then shape the pie crust in the tin foil pie pan.

Then wrap the unbaked pie crust tightly with plastic wrap and place into a heavy-duty freezer bag and zip closed making sure to remove any air from the bag.

How to use Frozen Pie Dough

If you are using a premed pie crust that you froze in a ball shape defrost it by placing it in the fridge for a few hours. Once it is defrosted roll out the dough and use it as usual.

It will take a few hours to defrost in the fridge, but you do not want to use anything to help it along or you will not end up with a flaky crust.

Tips for making This Recipe

Do not overwork the dough. This will add extra warmth to the butter that is in it and will make for a runny dough.

Make sure the ingredients are very cold. Using warm ingredients will give you a very unstable crust that will also not bake properly in the oven.

Use a pastry cutter. If you don’t own a pastry cutter you can use your hands however I suggest spending the money on one. It makes life so much easier.

I know there are some recipes out there that call for using shortening, this recipe is for how to make pie crust without shortening, we only use butter in our easy pie crust recipe.

What is Blind Baking?

Blind baking is when you are baking the crust without the filling. Not all pie recipes call for blind baking but some do.

If a recipe calls for blind baking the crust you will want to weigh down the crust with either pie weights or dried beans.

What are pie weights?

Pie weights are small weights that you place in the bottom of an unbaked pie crust to hold the pie crusts form while it bakes in the oven for a pie recipe that calls for the crust to be baked partially first.

If you do not use something to hold the crust down when you are blind baking the crust the dough will rise and get puffy.

What can I use instead of Pie Weights?

If you do not have pie weights you can use dry beans or uncooked rice.

How to roll out a pie crust

Lightly flour your working surface and roll out your dough, turn it a few inches after a few rolls to achieve a round shape. If it starts to stick add a little extra flour.

It should be a little larger than your pie plate. Roll the dough around your rolling pin to easily place the dough into the pan.

Using a pairing knife or kitchen shears to trim the excess dough to a one inch overhang over the edge of the pie pan.

How to put pie crust into a pie pan

When it is time to make the pie, place the pie crust into the pie dish. Gently press the dough so it fits the shape of the pie dish. Use a pairing knife to trim off any excess on the top edges.

Fold the dough under and seal it for an edge. Using your finger tips and knuckles crimp the edges.

How do I put a top crust on a pie?

After you have put the pie filling into the bottom crust you will want to put the top crust on. Lay the top crust on top and tuck into the sides of the pie crust edges and pinch in with the outer pie crust edge. Fold the dough under and seal it for an edge. Using your finger tips and knuckles crimp the edges. It is also important to then cut slices in the top of the crust so you have vents for while the pie is baking.

How to Make Homemade Pie Crust

Cut the butter into tablespoon sized pieces and add them to the dry ingredients flour mixture.

With the pastry cutter (or your hands) work the butter and flour mixture together until it looks like small peas.

Add the water little by little and mix with your hands until the dough comes together. You may not use all of the water, so it is important to start with a little water and then add more to it until you get the right texture of the pie crust.

Divide the pie crust dough into two equal parts. Roll each piece into a ball of dough and press flat onto plastic wrap and wrap well.

Chill the dough for at least one hour before using it to make a pie.

Looking for more dessert recipes? Check these out!

Want to whip up some delicious pies? Check out these helpful supplies and amazing pie plates! 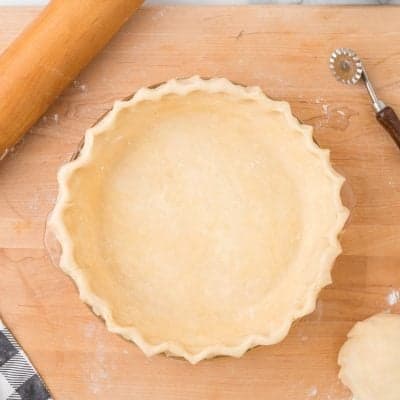 How to Make a Pie Crust

How to Make a pie crust. Buttery, flaky crust is what makes the perfect pie and these step by step direction on how to make homemade pie crust will give you the BEST pie ever!
4.15 from 7 votes
Print Pin Rate
Prep Time: 20 minutes
Cook Time: 1 hour
Total Time: 1 hour 20 minutes
Servings: 2 pie crust
Author Lauren
Prevent your screen from going dark

How to use Pie crust to make a pie

Looking for more amazing recipes? Check these out! 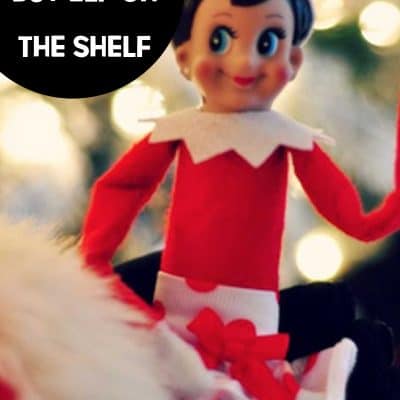 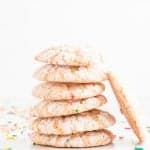 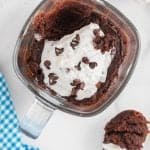 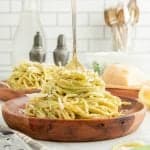 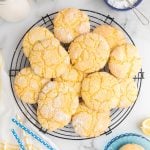 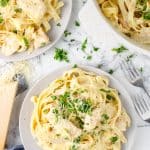 This website uses cookies to improve your experience while you navigate through the website. Out of these, the cookies that are categorized as necessary are stored on your browser as they are essential for the working of basic functionalities of the website. We also use third-party cookies that help us analyze and understand how you use this website. These cookies will be stored in your browser only with your consent. You also have the option to opt-out of these cookies. But opting out of some of these cookies may affect your browsing experience.
Necessary Always Enabled
Necessary cookies are absolutely essential for the website to function properly. This category only includes cookies that ensures basic functionalities and security features of the website. These cookies do not store any personal information.
Non-necessary
Any cookies that may not be particularly necessary for the website to function and is used specifically to collect user personal data via analytics, ads, other embedded contents are termed as non-necessary cookies. It is mandatory to procure user consent prior to running these cookies on your website.
SAVE & ACCEPT
4084 shares