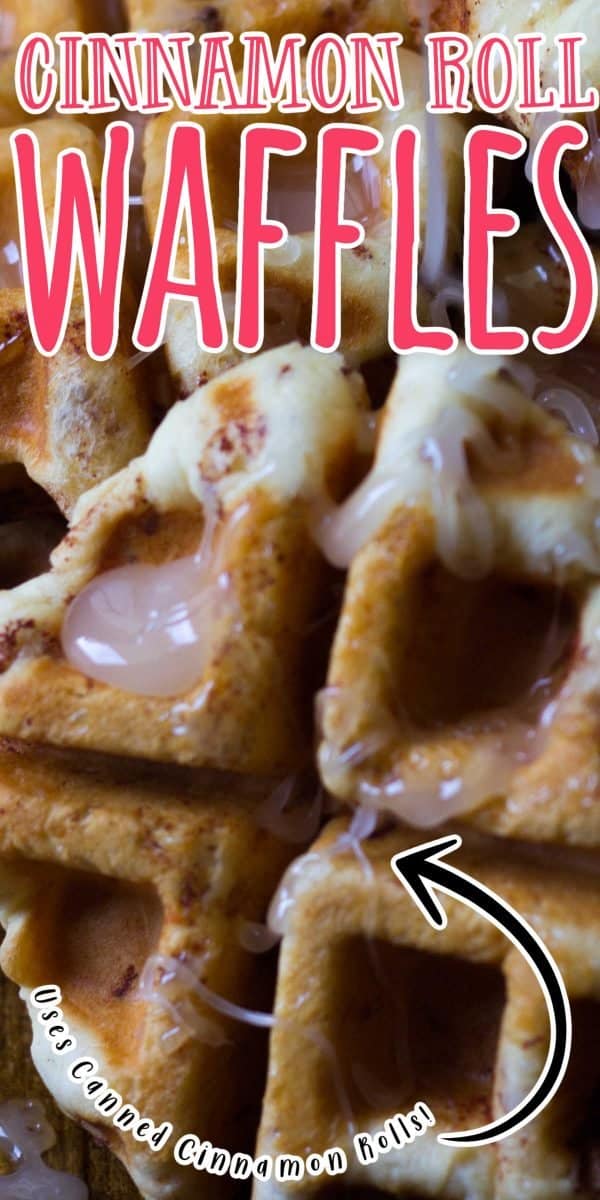 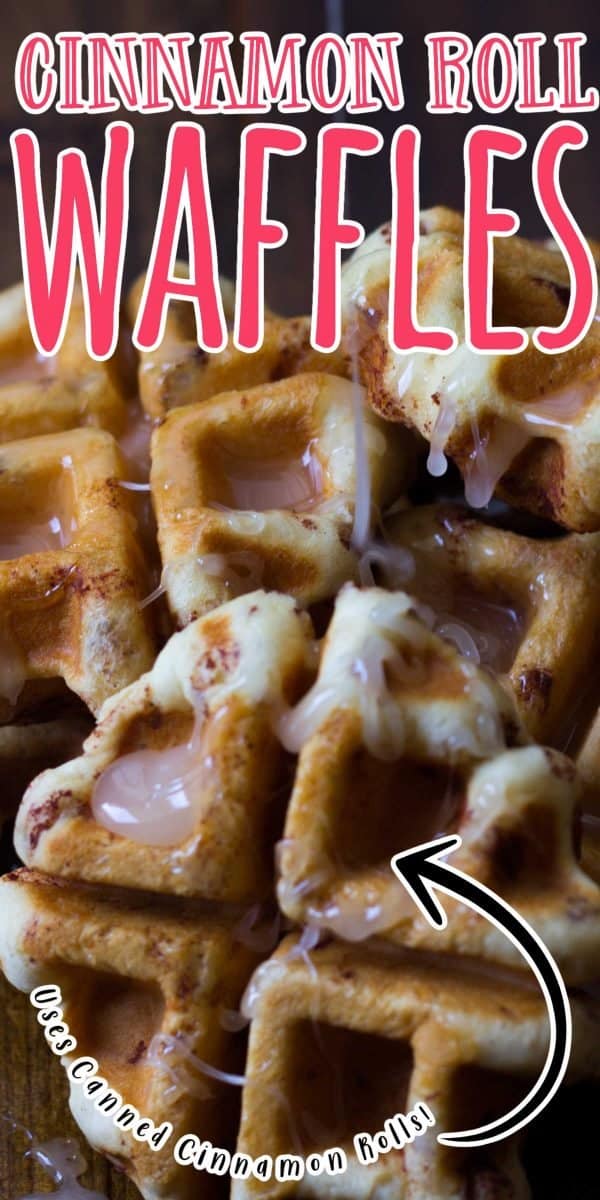 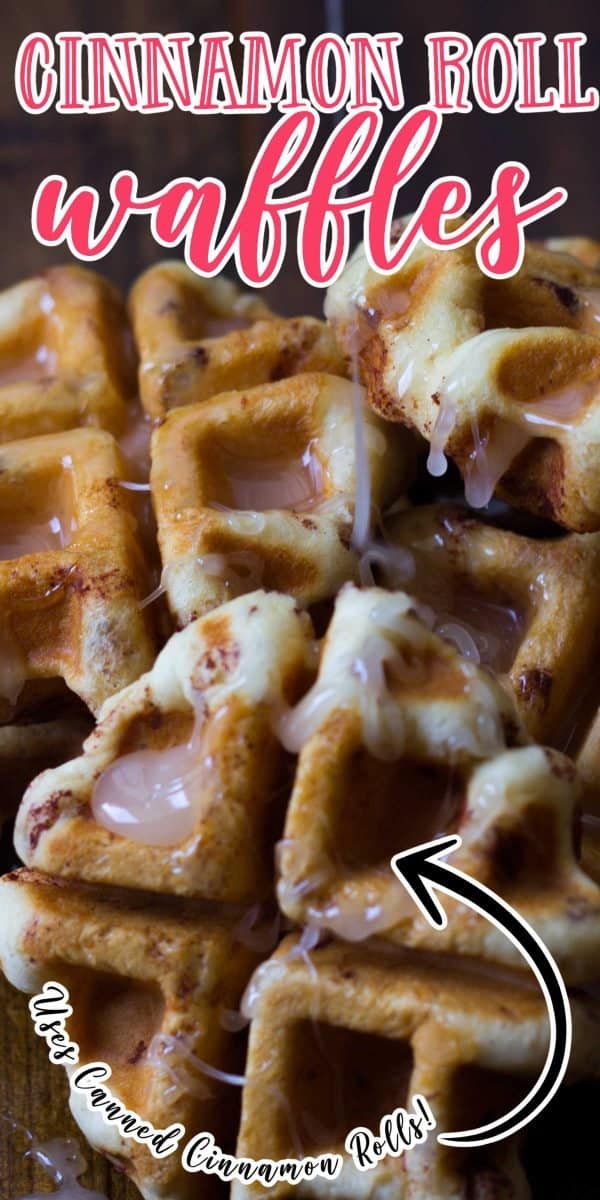 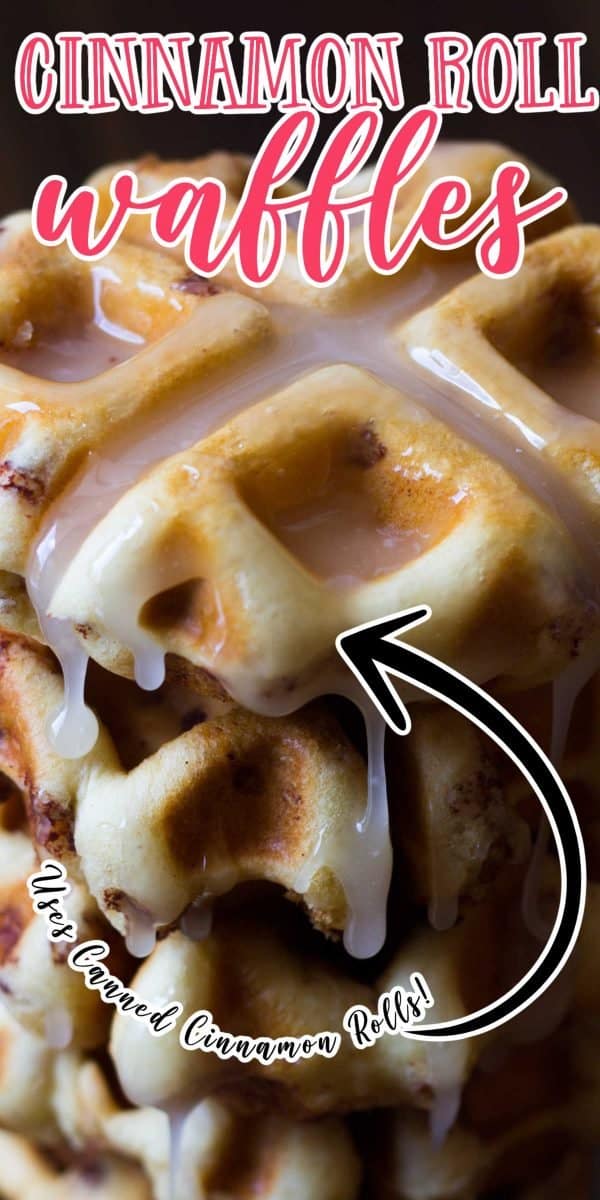 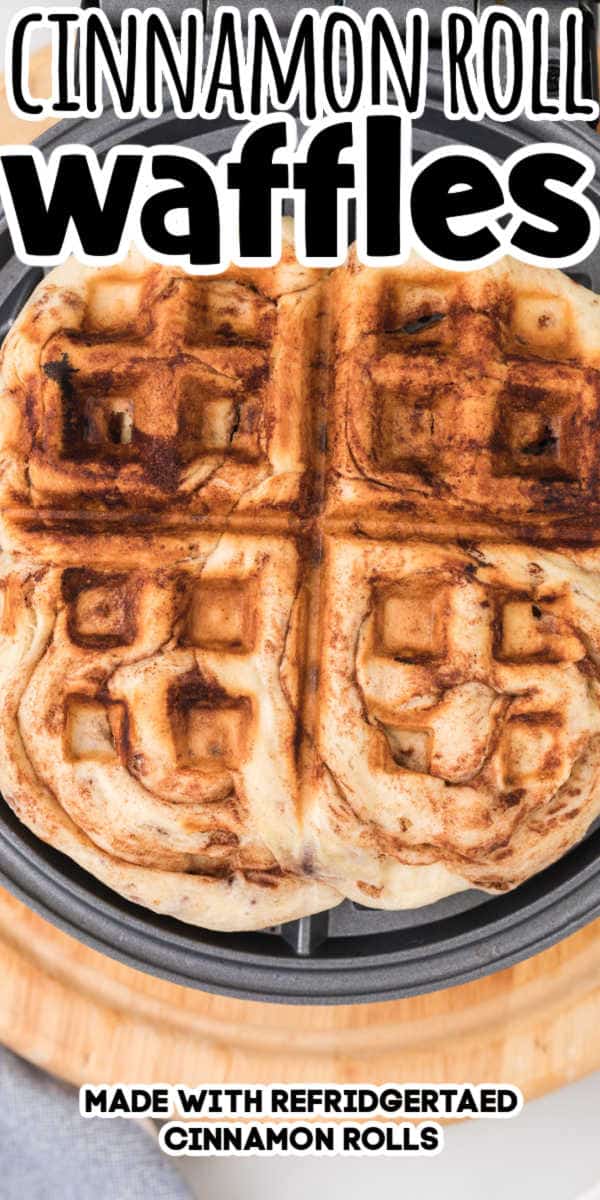 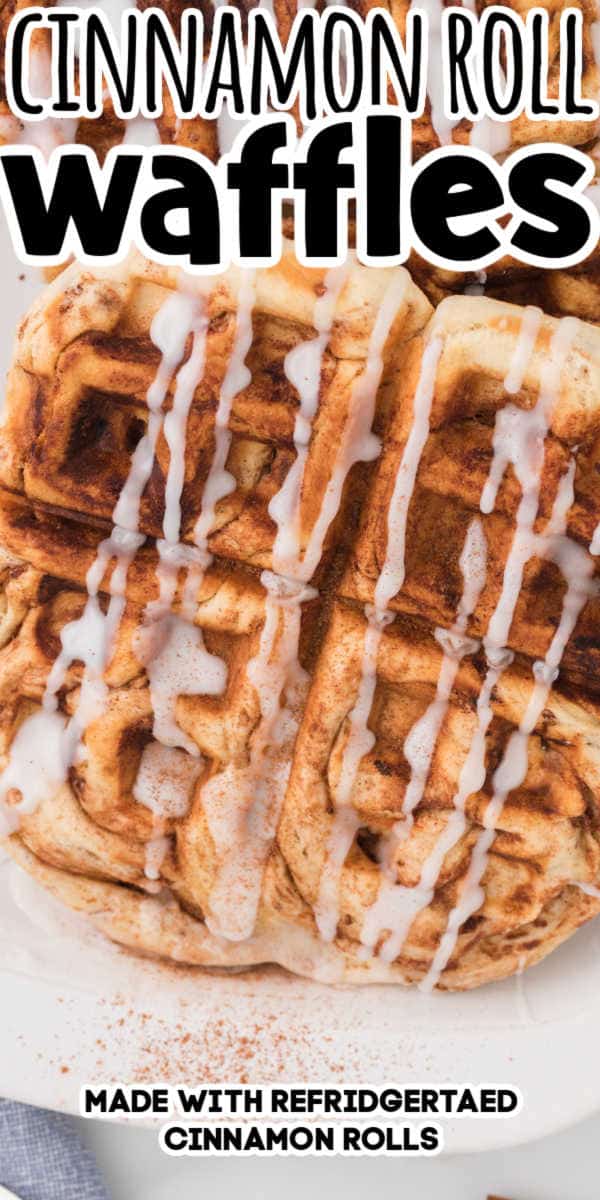 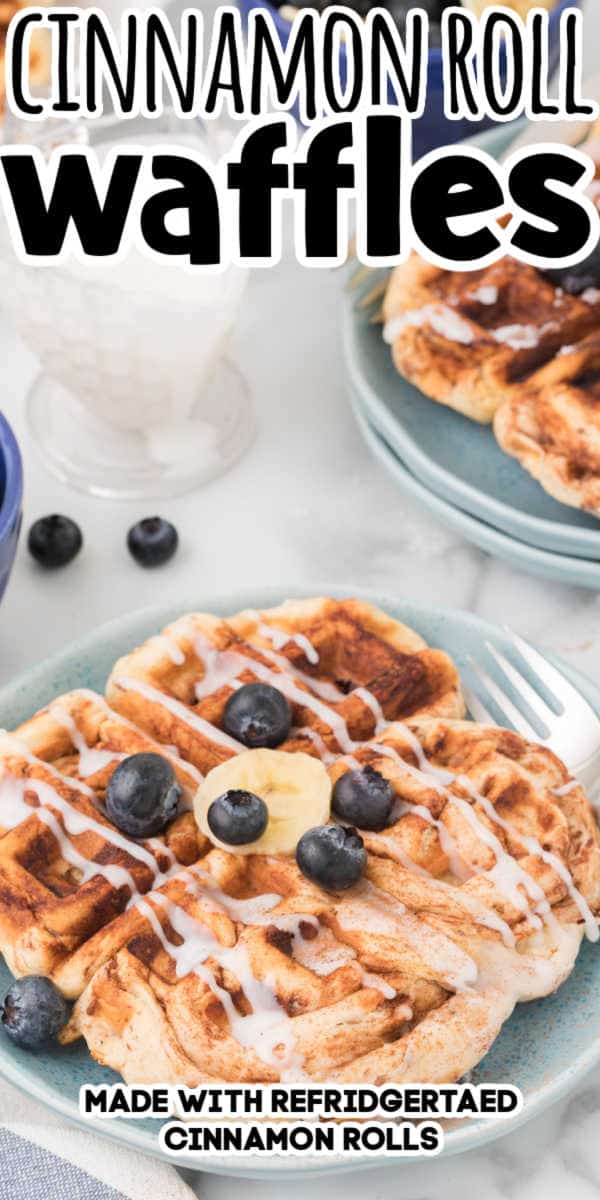 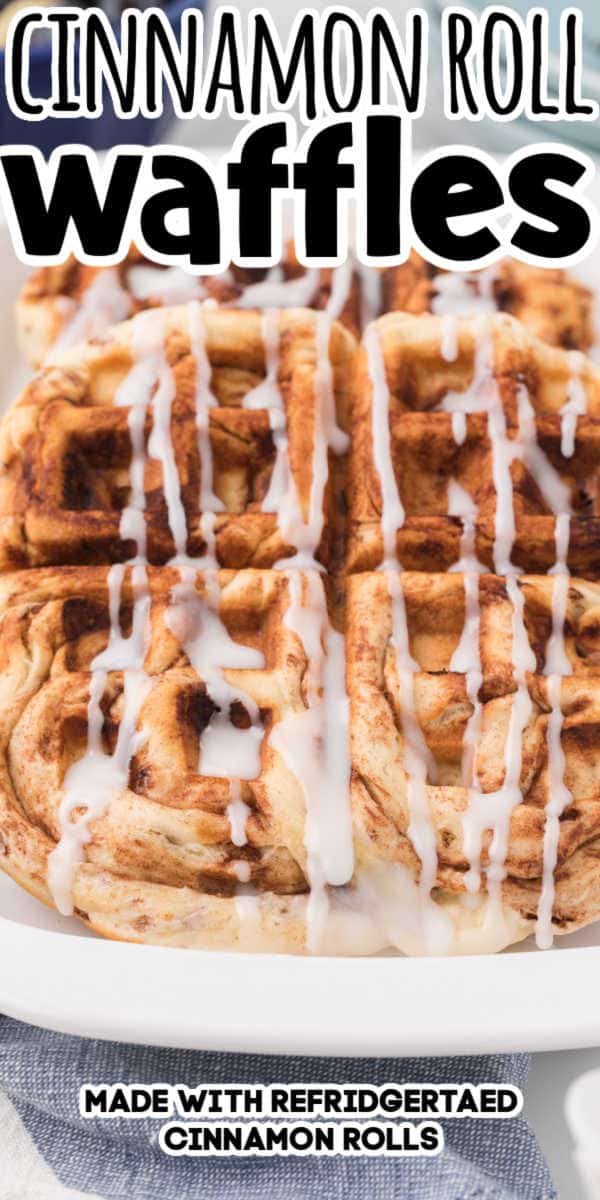 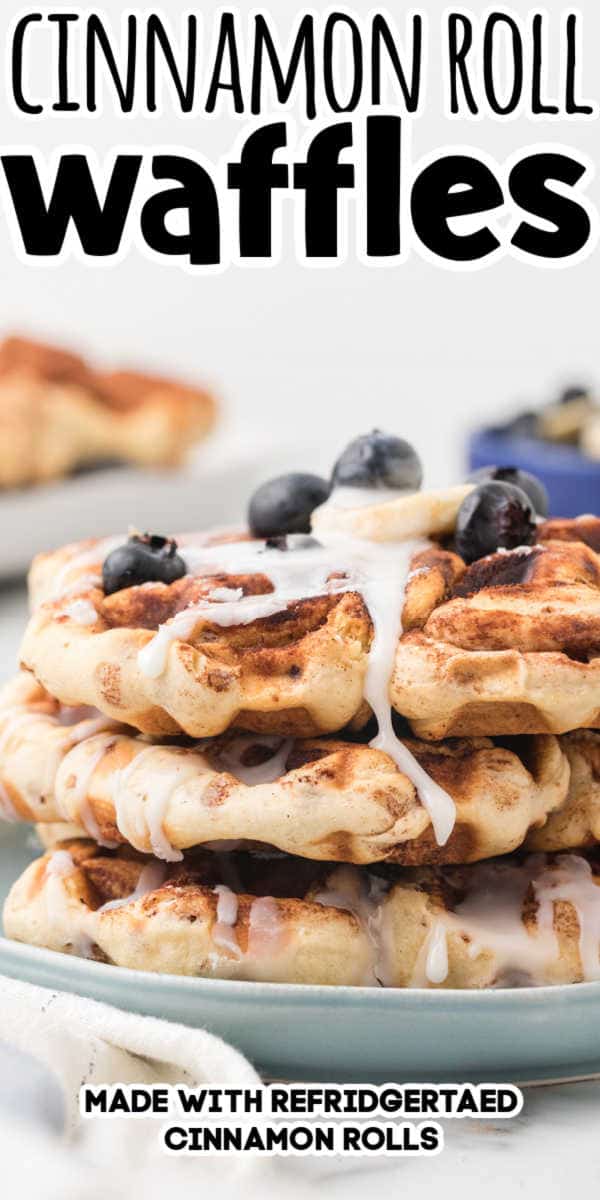 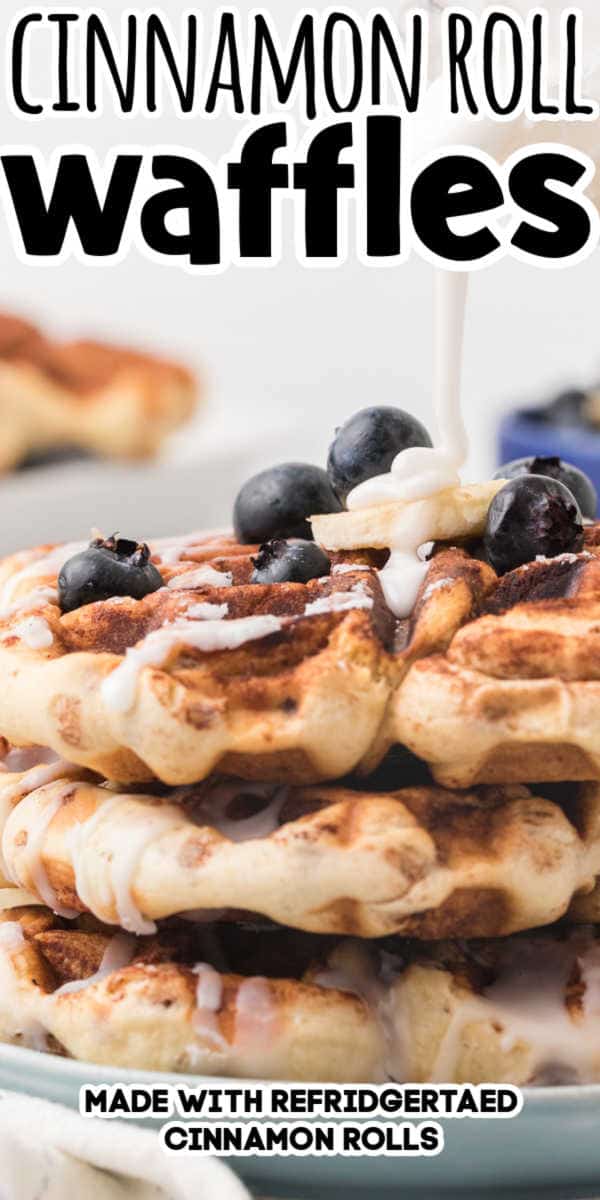 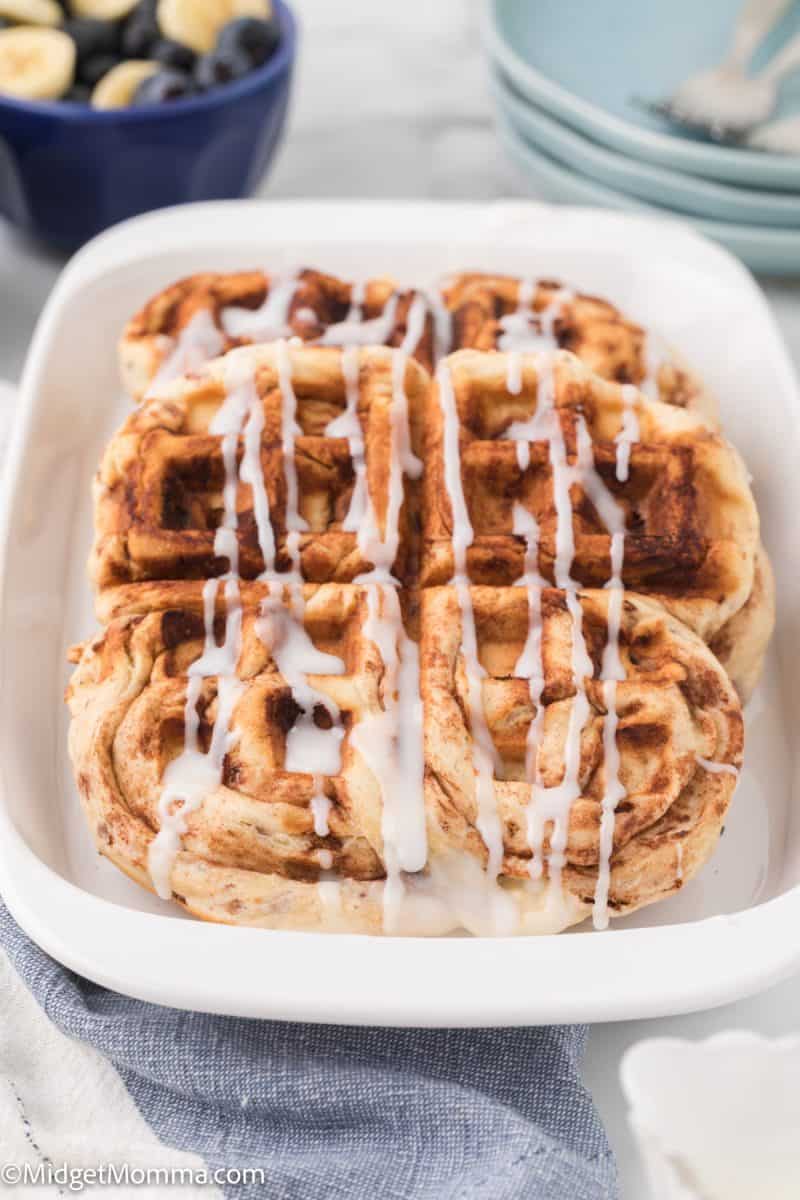 Cinnamon Roll Waffles Made with Canned Cinnamon Rolls are AMAZING! These amazing cinnamon roll waffles are made with canned cinnamon rolls and the frosting that comes with them right in your waffle maker! Seriously these one ingredient waffles are the most amazing waffles ever!

Do you want the EASIEST Waffle recipe ever that makes the most amazing cinnamon bun waffles? You are going to LOVE this Cinnamon Roll Waffles Recipe! While I love homemade waffles and they are my normal go to, these 1 ingredient waffles are one of our favorite quick breakfast recipes. These easy waffles are also great if you are having a brunch or a fun weekend breakfast and you need to make something quick and easy that has like no clean up needed. If you love easy recipes you will love this one and so will the kids!

This easy recipe quickly became one of our favorite go to recipes to make when we want a fun start to our day. This easy recipe came to be nne morning that we were running behind and I had planned on making cinnamon rolls. I didn’t have time for them to bake in the oven, but I did have time to cook them in the waffle iron. While I had never made them this way before and the kids were questioning if it would work we gave it a shot. While I knew they would cook, I didn’t know 100% how well they would turn out.

Well, we ended up with the most amazing cinnamon waffles ever. I knew you could cook cinnamon rolls in the waffle maker but, I expected them to be “ok”. I did not expect them to be as amazing as they were! I had some very happy children when 5 minutes later I told them breakfast was done and they had these 5 Minute Cinnamon Roll Waffles!

You are going to love this easy cinnamon roll waffles recipe, I am sure of it! You will love how easy they are to make, how little mess you have to clean up and how amazing they taste!

I have also made these waffles instead of making cinnamon roll pancakes when we have been short on time and everyone in the house is always happy when I make them!

We originally posted this waffles recipe back in 2014 and recently took new photos. These new photos are making me drool and want to lick my screen just looking at them!! There are no changes to this easy waffles recipe, we just got you some new amazing photos that really show how tasty they are!

Looking for more waffle recipes? Check these out!

What is a cinnamon roll waffle?

How long do I cook cinnamon roll waffles?

Depending on your waffle maker it will take between 3-5 minutes for each set of 4 waffles that you are cooking.

How to Serve Waffles

Whenever we make them, we just drizzle or spread the icing that comes in the package on top of them. But you can totally top them with some whipped cream, powdered sugar, or maple syrup too!

If you want to make a homemade frosting instead of the frosting that comes with the refrigerated cinnamon rolls you totally can with an easy icing recipe. I have included instructions on how to make that below.

While I normally just use the icing that comes with the refrigerated cinnamon rolls or a quick powdered sugar icing. But if you are wanting to serve these for a brunch or a fancy breakfast there are lots of other toppings that are perfect to use.

The Best Side Dishes to Serve with Waffles

As far as side dishes for waffles, the list is basically endless. Anything that counts as a breakfast recipe will work as a side dish for waffles.

I try to make a balanced meal when I am serving waffles no matter if we are having them for breakfast, lunch, or brunch and there are plenty of breakfast side dish recipes that work well.

You can serve these tasty waffles with a side of fruit, blueberries, strawberries, and bananas are my kiddo’s favorites. There are lots of other side dish options too!

Tips for Making Cinnamon Rolls in the Waffle Maker

Use Nonstick Cooking Spray. Spray waffle iron with nonstick spray if you don’t have a non-stick surface.

How to Make Cinnamon Roll Waffles

Heat waffle iron until it says it is good to go. Spray the waffle maker top and bottom with nonstick cooking spray.

Open cinnamon rolls and set aside the icing container.

Put 4 pieces of cinnamon roll dough onto the waffle maker, one in each section of it and have them touch, close the lid and cook for 3-5 minutes. (This may be longer depending on your waffle maker.) and cook until they are golden brown.

Remove waffles from the waffle maker and place them on a plate, spread a little bit of icing on them while they are hot so it melts.

Repeat the above directions with the rest of the can of cinnamon rolls.

How to Make Easy Waffle Icing

Add the confectionery sugar to a bowl add 2 Tablespoons of milk and the extract if using it. Mix and add additional milk to get the desired consistency.

Ready to get started making chaffles? Snag one of our favorite machines. 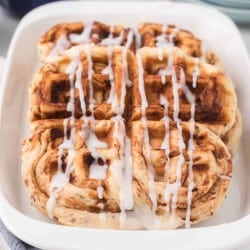 Created by Lauren
No ratings yet
Prep Time 1 min
Cook Time 5 mins
Total Time 6 mins
Print Recipe Pin Recipe Rate Recipe
Cinnamon Roll Waffles Made with Canned Cinnamon Rolls are AMAZING! These amazing cinnamon roll waffles are made with canned cinnamon rolls and the frosting that comes with them right in your waffle maker! Seriously these one ingredient waffles are the most amazing waffles ever! 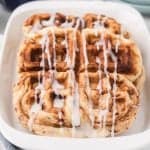 This website uses cookies to improve your experience while you navigate through the website. Out of these, the cookies that are categorized as necessary are stored on your browser as they are essential for the working of basic functionalities of the website. We also use third-party cookies that help us analyze and understand how you use this website. These cookies will be stored in your browser only with your consent. You also have the option to opt-out of these cookies. But opting out of some of these cookies may affect your browsing experience.
Necessary Always Enabled
Necessary cookies are absolutely essential for the website to function properly. This category only includes cookies that ensures basic functionalities and security features of the website. These cookies do not store any personal information.
Non-necessary
Any cookies that may not be particularly necessary for the website to function and is used specifically to collect user personal data via analytics, ads, other embedded contents are termed as non-necessary cookies. It is mandatory to procure user consent prior to running these cookies on your website.
SAVE & ACCEPT
450 shares