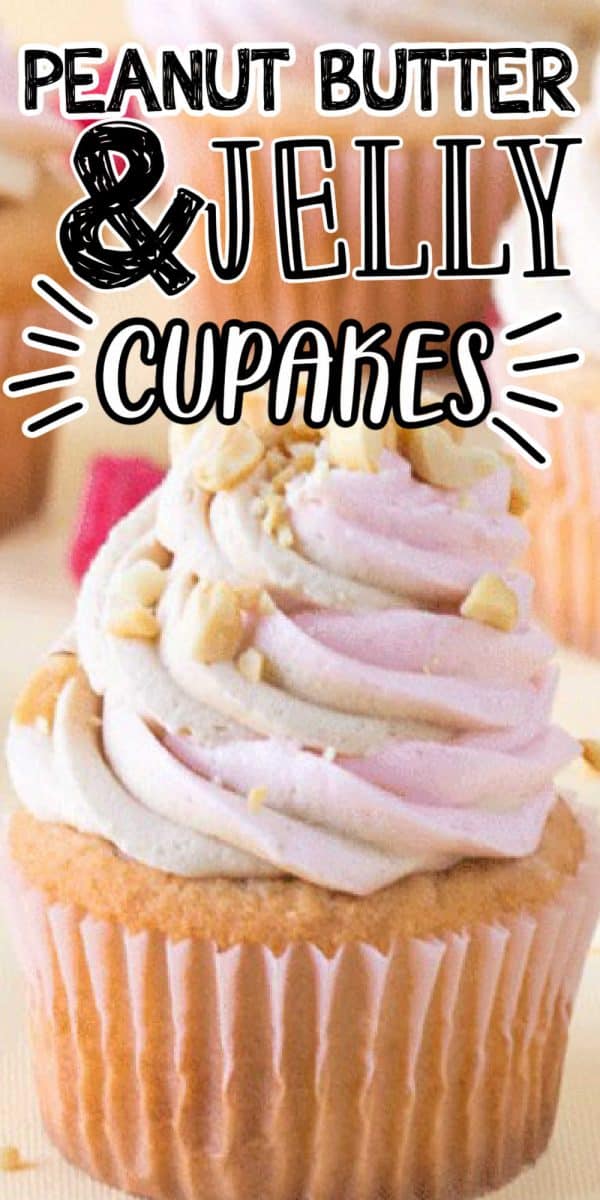 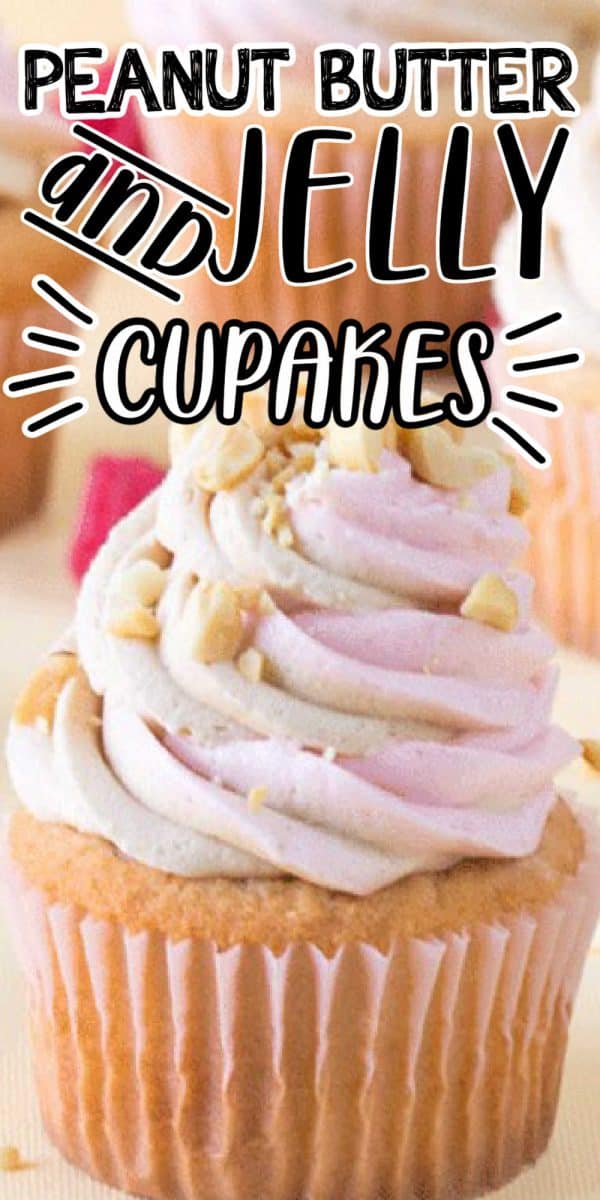 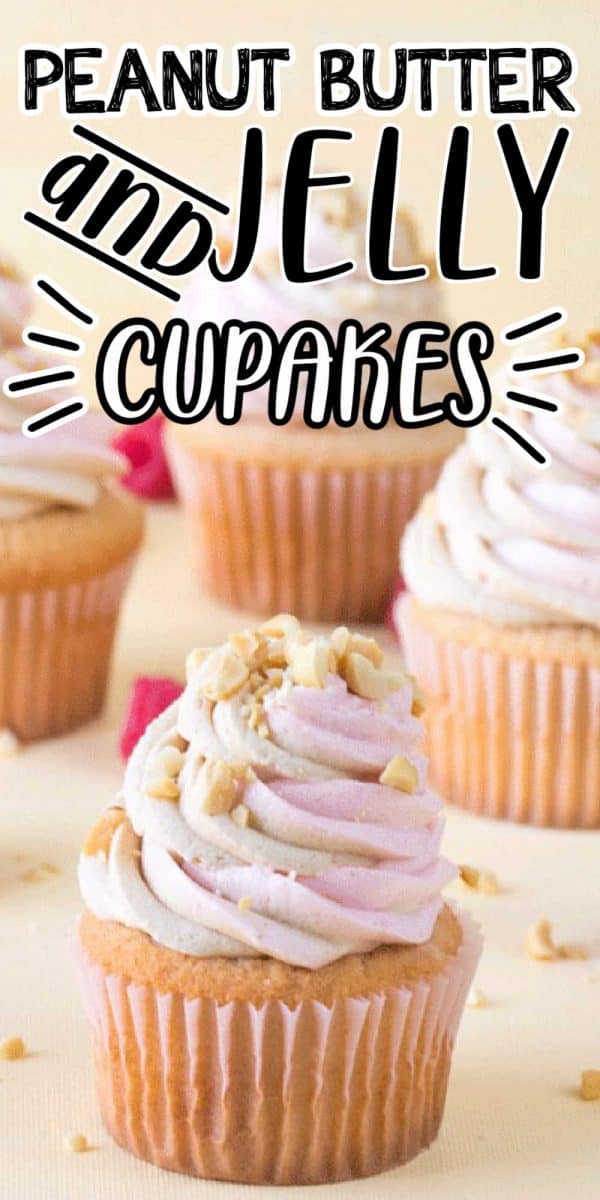 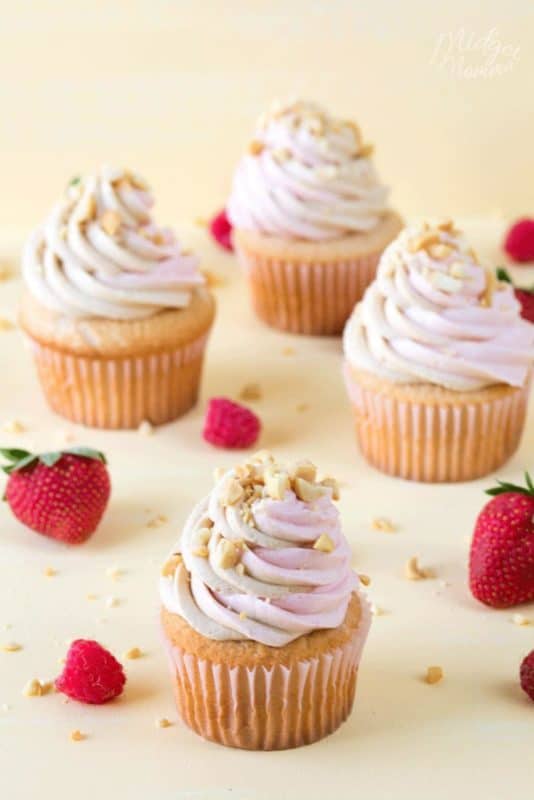 Peanut Butter And Jelly Cupcakes make one tasty cupcake! It is no surprise since Peanut Butter and Jelly go together so well and these easy cupcakes are perfect for a PB&J fan!

With back to school upon us, I thought it would be fun to turn a classic kids lunch into a fun after school treat! For my daughters first day of school I asked her what she wanted for lunch and of course, she chooses the classic peanut butter and jelly. It’s that salty sweet combination that kids can’t seem to get enough. I didn’t mind this choice because how easy is it to throw some peanut butter and jelly onto two slices of white bread and call it a day.

You can easily turn these cupcakes into filled cupcakes by adding a filling (Jelly, peanut butter or a bit of frosting works well for these cupcakes) after baking them. Just use an apple corer to remove about one inch of the center of each cupcake. Then you can put whatever filling you want to in them and then frost as you want to.

If you have never decorated cupcakes, be sure to check out these posts to help you. I promise you that it is super easy to have bakery fancy cupcakes made at home in your kitchen!

How to Make Peanut Butter and Jelly Cupcakes

Bake the cupcakes and allow them to cool. While they are cooling make your buttercream frostings.

Place a large straight piping tip into a piping bag. Spoon the peanut butter buttercream so it is only on the right side of the pastry bag going about halfway up and half way full.

Spoon the strawberry buttercream into the left-hand side of the pastry bag so it’s equal to the peanut butter side and they’re touching. Twist the top of the bag so it’s closed.

Sprinkle each cupcake with the chopped peanuts. 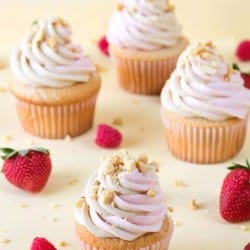 How to Make Vanilla Cupcakes

How to Make Strawberry Buttercream Frosting

How to Assemble Cupcakes 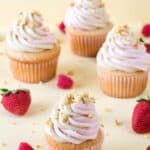 17 Weight Watchers Smart Points per serving on the Freestyle Program

This website uses cookies to improve your experience while you navigate through the website. Out of these, the cookies that are categorized as necessary are stored on your browser as they are essential for the working of basic functionalities of the website. We also use third-party cookies that help us analyze and understand how you use this website. These cookies will be stored in your browser only with your consent. You also have the option to opt-out of these cookies. But opting out of some of these cookies may affect your browsing experience.
Necessary Always Enabled
Necessary cookies are absolutely essential for the website to function properly. This category only includes cookies that ensures basic functionalities and security features of the website. These cookies do not store any personal information.
Non-necessary
Any cookies that may not be particularly necessary for the website to function and is used specifically to collect user personal data via analytics, ads, other embedded contents are termed as non-necessary cookies. It is mandatory to procure user consent prior to running these cookies on your website.
SAVE & ACCEPT
312 shares