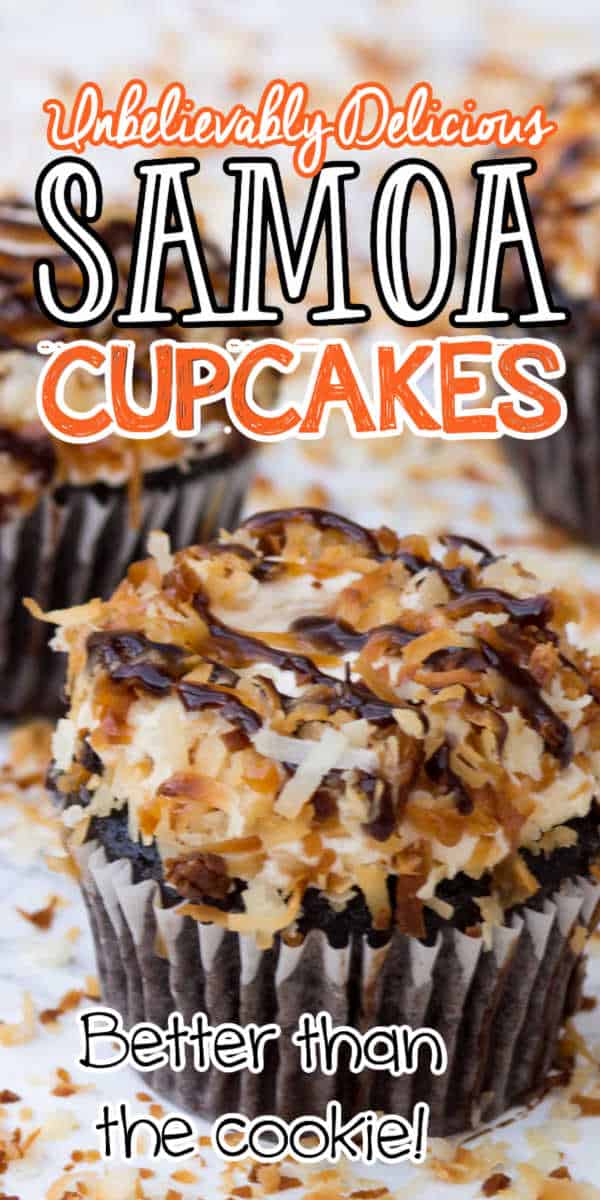 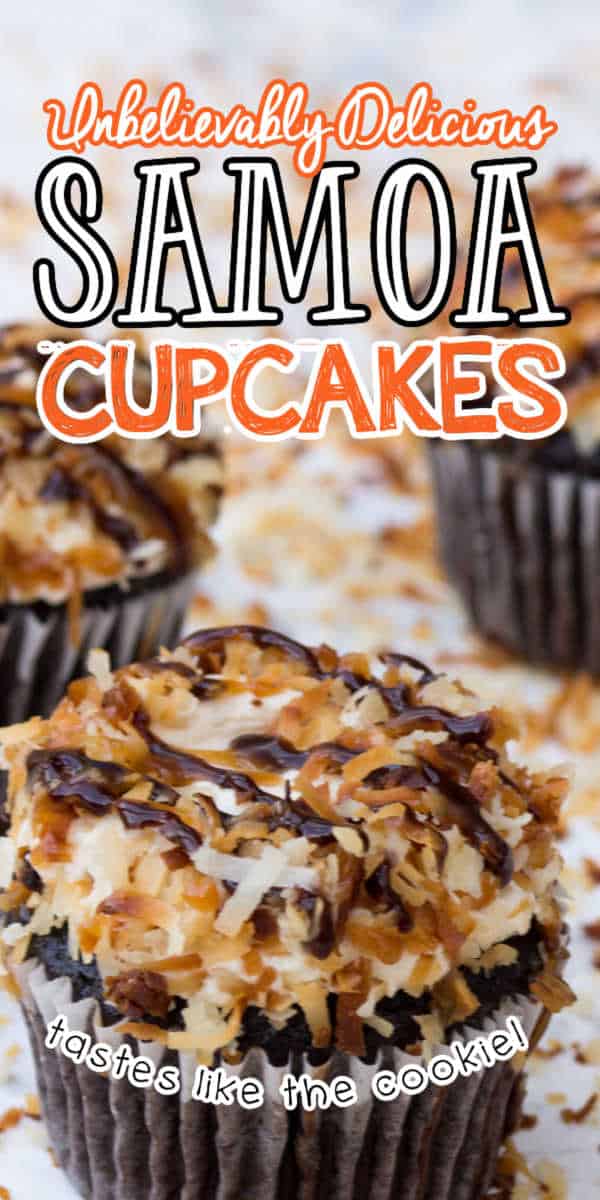 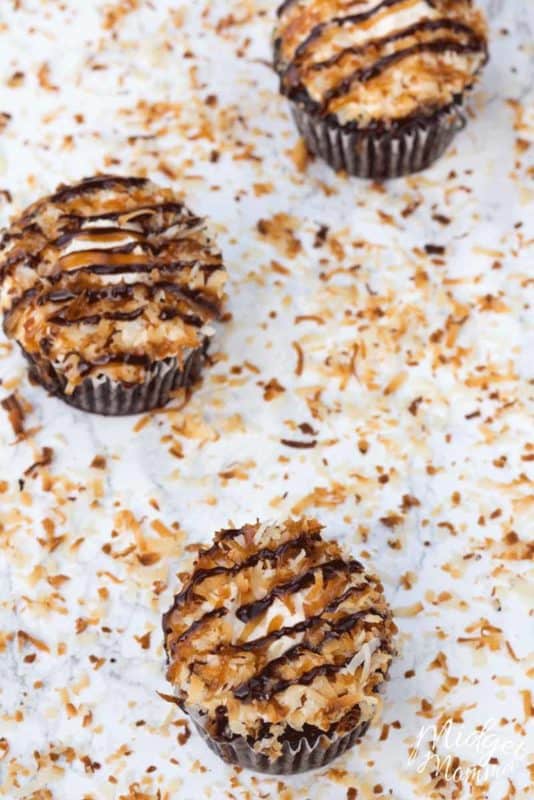 Samoas Cupcakes are the ultimate cupcake for the girl scout cookie fan! All the flavors of a Samoas cookie in a homemade Samoas Cupcakes Recipe that everyone will love!

This Girl Scout cookie cupcake recipe is going to be a family favorite I know it! 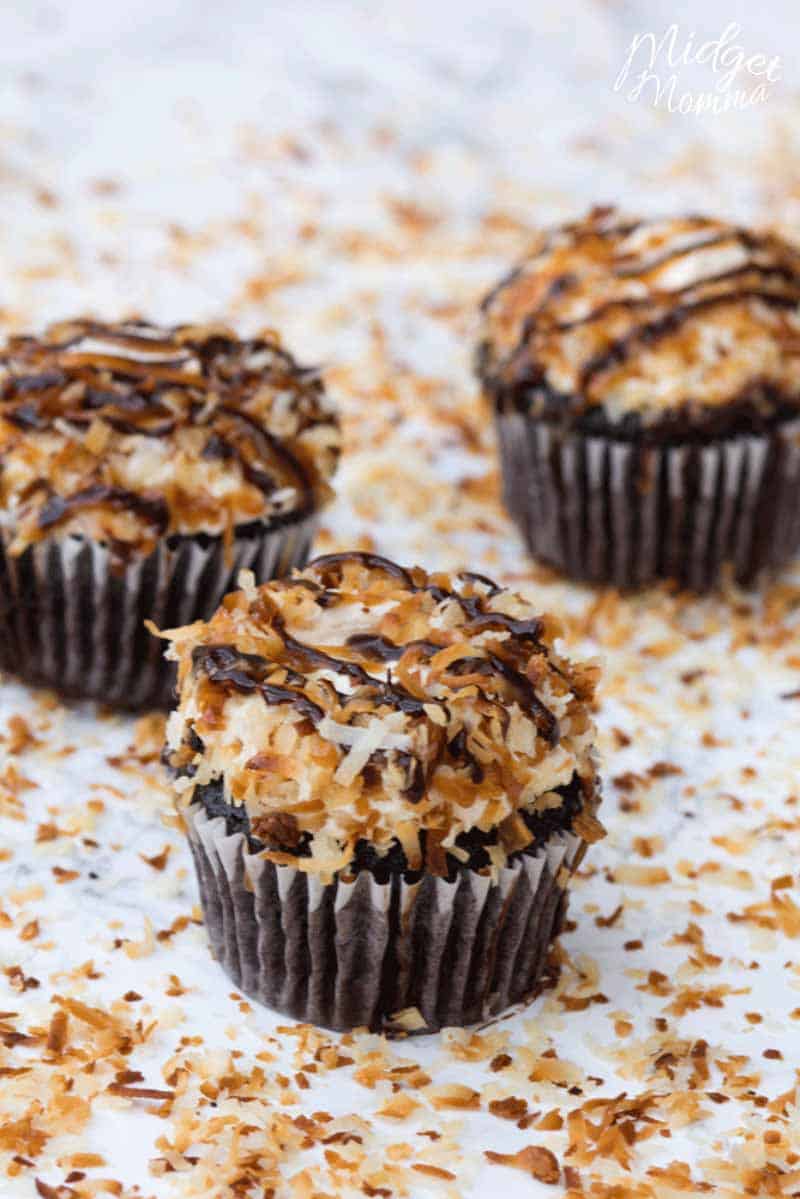 Side note, did you know they make Girl Scout Cookie Cereal? I know I was shocked when I saw it too! But they do! You can find it on Amazon! I also found these Coconut Fudge and Caramel Cookies, and while they are not exactly the same as Samoas Cookies, they sometimes can do the trick when you are wanting that cookie crunch and flavor!

Do not over mix. Over mixing the batter will lead to having tough and flat cupcakes. When making cupcakes you have to be careful that you don’t over mix the batter when you are folding in the flour mixture. If you over-mix your cupcake batter your cupcakes will turn out flat. You want to mix everything just until mixed, over mixing will cause you to have rough and tough cupcakes. We all know that the best cupcake are light and fluffy.

Homemade Toasted Coconut. When making these Girl Scout Samoas Cupcakes you are going to need toasted coconut so make sure you check out how to toast your coconut.

How to Store Decorated Cupcakes

After frosting cupcakes you are ok to store them on the counter for a day or 2 but after that they should be stored in the fridge. If you are storing them with frosting on top I suggest using a cupcake storage container.

How to make Samoas Cupcakes

Make the Cupcakes and while they are cooling make the caramel buttercream Frosting.

Allow the cupcakes to cool completely. Once they are cool frost the cupcakes with your caramel buttercream frosting.

Frost the cupcakes using the cupcake swirl method and a large tip and frost each cupcake.

Take a handful of your toasted coconut over a bowl and press the edge of the cupcake into the coconut as you twirl the cupcake around so you end up with a ring of coconut in the shape of a circle around the top of your buttercream. Repeat this to each cupcake.

Place all the cupcakes on to a sheet pan and drizzle the top back-and-forth with that caramel sauce and then the chocolate syrup up so you end up with a little lines of caramel and chocolate.

These Samoas Cookies cupcakes are best served at room temperature. 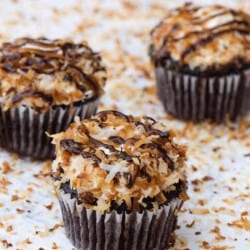 Created by Lauren
3.43 from 7 votes
Prep Time 10 mins
Cook Time 20 mins
Print Recipe Pin Recipe Rate Recipe
If you are looking for an amazing chocolate cupcake then you are going to love these Girl Scout Samoas Cupcakes. They are the perfect combination of chocolate cupcake, caramel and coconut.

How to make Caramel Buttercream Frosting

How to Make Chocolate Cupcakes

How to Assemble cupcakes 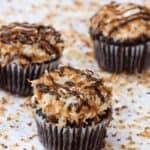 18 Weight Watchers SmartPoints per cupcake on the Freestyle program

More Cupcake Recipes you will love!

This website uses cookies to improve your experience while you navigate through the website. Out of these, the cookies that are categorized as necessary are stored on your browser as they are essential for the working of basic functionalities of the website. We also use third-party cookies that help us analyze and understand how you use this website. These cookies will be stored in your browser only with your consent. You also have the option to opt-out of these cookies. But opting out of some of these cookies may affect your browsing experience.
Necessary Always Enabled
Necessary cookies are absolutely essential for the website to function properly. This category only includes cookies that ensures basic functionalities and security features of the website. These cookies do not store any personal information.
Non-necessary
Any cookies that may not be particularly necessary for the website to function and is used specifically to collect user personal data via analytics, ads, other embedded contents are termed as non-necessary cookies. It is mandatory to procure user consent prior to running these cookies on your website.
SAVE & ACCEPT
4772 shares