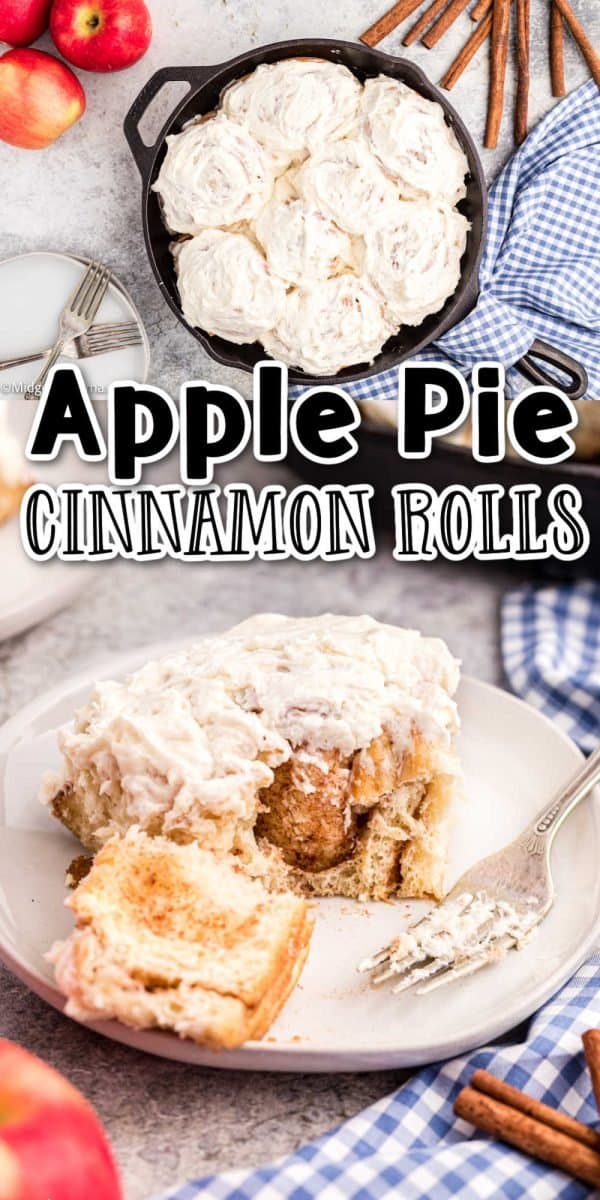 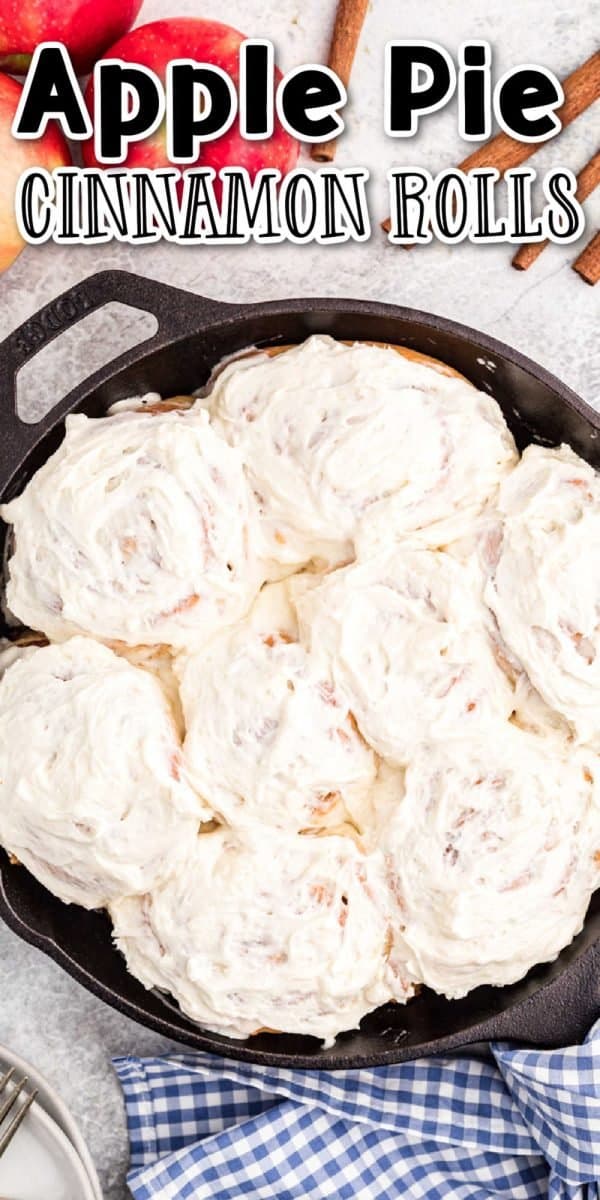 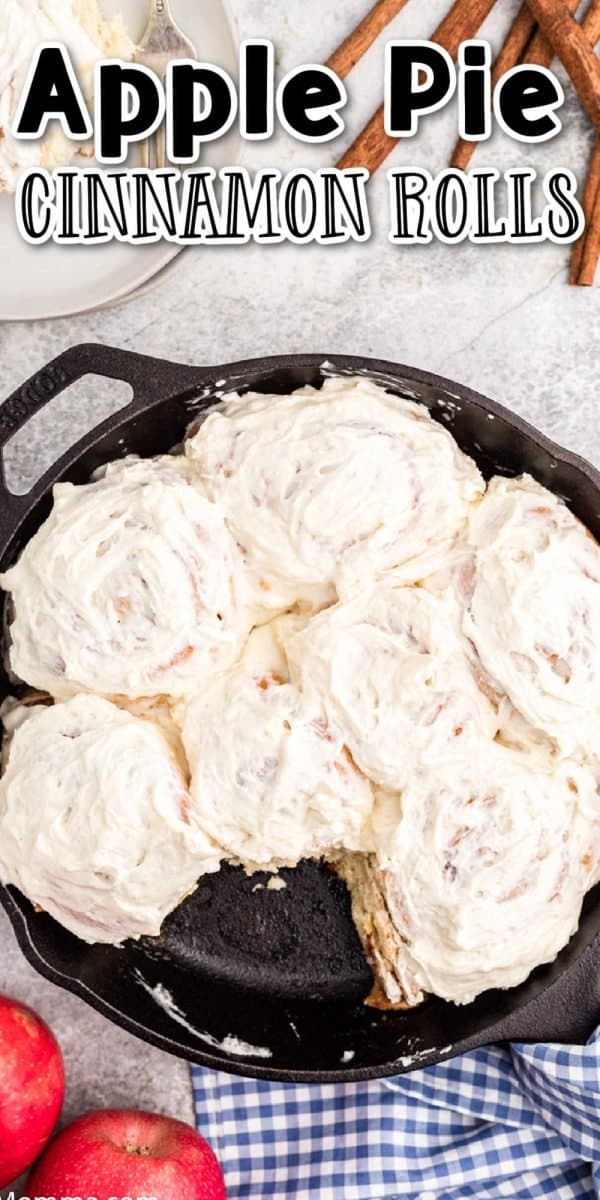 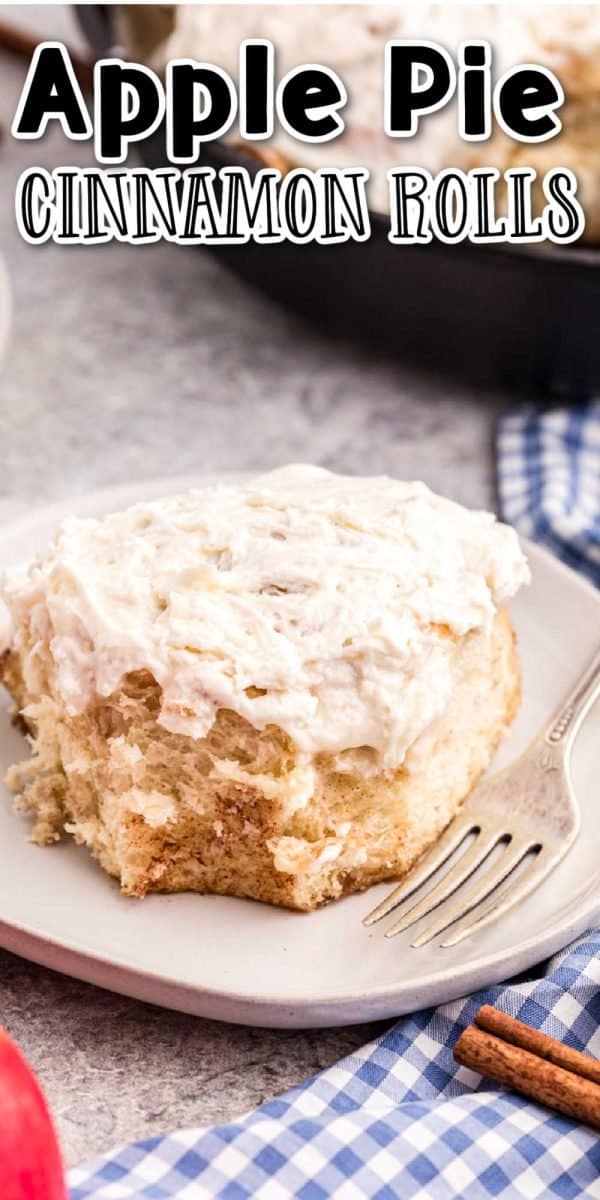 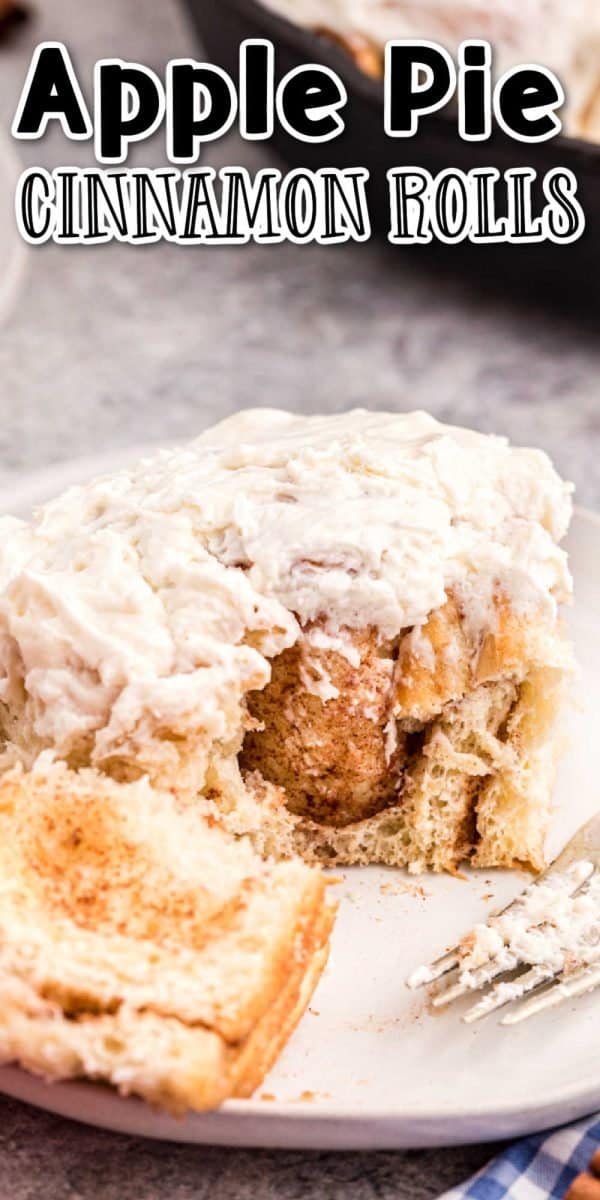 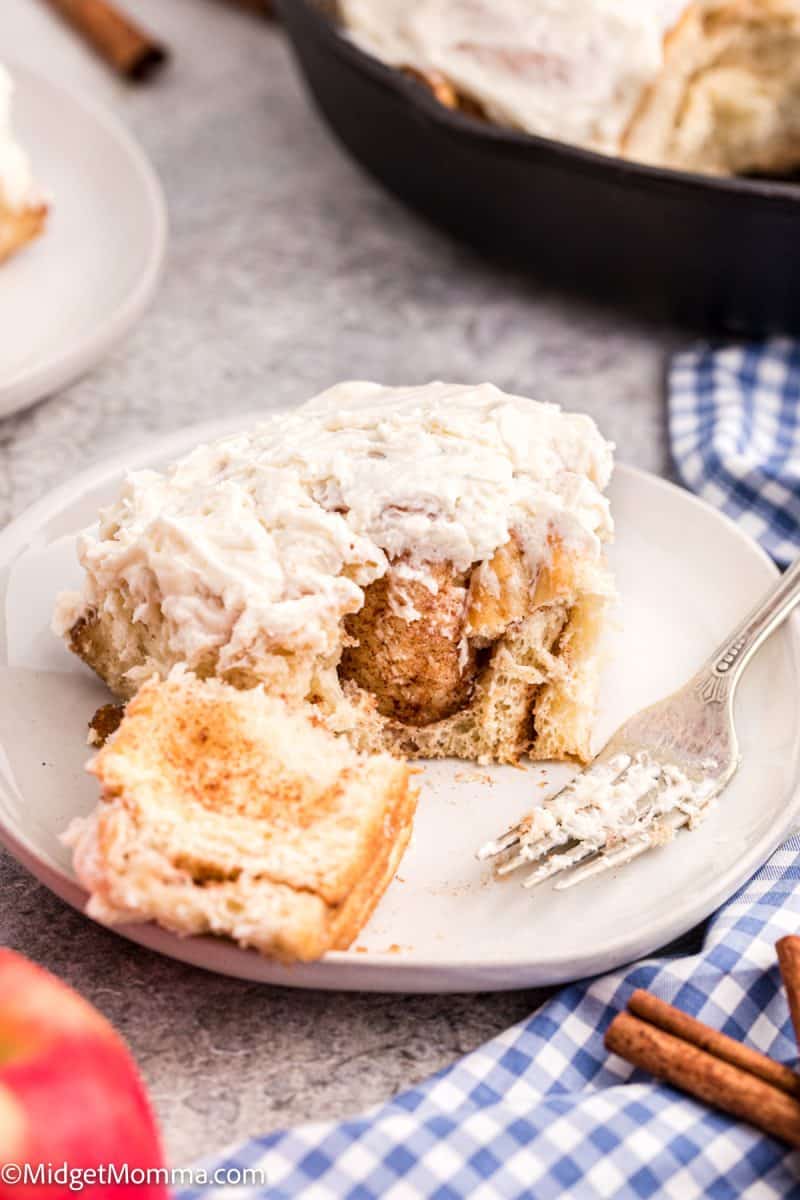 Nothing beats a nice warm ooey-gooey cinnamon roll, that is warm, sweet, and oozing with icing for breakfast. Ok, I lie it doesn’t have to be a cold morning it can be any morning, midday, or afternoon that is the perfect time to enjoy these homemade apple cinnamon rolls. There really is no wrong time to heat one up after you have made them and sit down to enjoy it.

As much as I love a classic cinnamon roll I like to make fun variations of them too. This apple pie cinnamon roll recipe is one of our family favorites. These soft cinnamon rolls filled with apple filling and then topped with a cream cheese frosting are my go-to when I want a fancy breakfast for the kids. They take a bit of work but they are so worth it when you take a bite of these delicious cinnamon rolls.

What do you serve with Cinnamon rolls for breakfast?

If you are making these cinnamon rolls for breakfast they pair perfectly with a cup of coffee or orange juice or a smoothie like the delicious Peach mango smoothie and fruit.

Being a classic breakfast item that is great for brunch they pair well with just about every other breakfast food you would think to make. If you are looking for breakfast dishes that we love to serve with cinnamon rolls check out some of our favorites.

What fruit goes with cinnamon rolls?

All fruits go well with cinnamon rolls but my favorites to serve are pears, apples, blackberries, raspberries, and blueberries.

Different types of applesauce. When making these Apple Pie Cinnamon Rolls I prefer using homemade applesauce, you can use the jarred store-bought stuff but I much prefer fresh applesauce in general. I love using my homemade crockpot applesauce when making these since I can make it the day before or if you have it on hand defrost your freezer applesauce and use that. If possible skip using the jar sauce, the extra step of homemade is soo much better!

Don’t skimp on rising time. You want the rise time for the dough so you have soft and fluffy cinnamon rolls so it is very important to let the dough rise for enough time.

Flour your work surface. When you are rolling out the dough it is important to add a sprinkle of flour to the counter to prevent the dough from sticking. I also sprinkle a little bit on my rolling pin to make rolling easier.

Add chopped apples. You can also chop an apple and add it to the apple sauce. If you are doing so then I suggest using granny smith apples, however just about any type of apple will work.

Why do I frost them twice?

I love frosting in between the cinnamon roll sections when I eat cinnamon rolls, so to make them perfect I put one layer of frosting on as soon as they come out of the oven and then a second layer after they have cooled a bit.

Do I need an electric mixer?

You do not need an electric stand mixer, however, it does make things easier. If you do not have one then you can use a mixing bowl and a hand mixer.

Can I make these cinnamon rolls ahead of time?

Cinnamon rolls are one of my favorite breakfasts and I like to make them ahead of time and then reheat them in the morning. The great thing about these from scratch apple cinnamon rolls is that you can make them the night before and reheat them and they are still just as delicious as when they came out of the oven.

They are best stored without the second layer of frosting and then add that frosting on them after you have warmed them up to serve them.

How to store Cinnamon Rolls

Cinnamon rolls will keep for 2 days when stored with plastic wrap on the counter. If you store them in the fridge they will keep for up to one week.

Allow them to cool completely before covering with plastic wrap.

Can you freeze Cinnamon rolls?

How to freeze homemade cinnamon rolls

Star with bringing the ingredients to room temperature that need to be. Then you will make the cinnamon roll dough.

In a large bowl add 2 1/4 cups of flour, sugar, salt, and yeast together until evenly mixed and then set aside.

Pour the melted butter mixture into the flour mixture and mix well.

Next, add the egg and the leftover flour to the bowl. Starting with 1/3 a cup working up to using 1/2 cup until the dough is ready, the dough is ready when it pulls away from the side of the bowl and has an elastic consistency.

Remove the dough and knead the dough for about 3-4 minutes on a floured surface.

Grease the bowl, add the dough to the greased bowl, and cover with a kitchen towel. Let the dough rest for 10 minutes.

Next, roll the dough out in a rectangle using a rolling pin and your hands.

In a small bowl mix the cinnamon and sugar.

Spread the butter on top then sprinkle the dough with cinnamon and sugar mixture, and then spread the applesauce on top.

Roll up the dough tightly by squeezing the edges closed, then cut into 8 equal pieces about 1- 1 1/2 inch wide each.

After you are done putting the rolls into the cast iron or the baking pan, cover the pan loosely with a kitchen towel and put it in a draft-free area to rise for 90 minutes.

Preheat the oven to 375 degrees and bake for 25-30 minutes until they are light golden brown. While the cinnamon rolls are baking make the frosting.

How to make Icing for Cinnamon Rolls

In a bowl, combine the vanilla, corn syrup, and lemon juice in a small bowl.

In the bowl of a stand mixer (or a mixing bowl with a hand mixer), whip cream cheese and butter together.

Add the liquid ingredients into the mixer bowl with the cream cheese and butter and continue to mix. 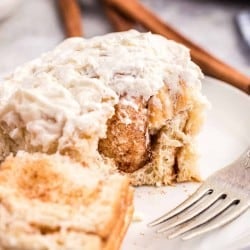 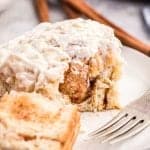 This website uses cookies to improve your experience while you navigate through the website. Out of these, the cookies that are categorized as necessary are stored on your browser as they are essential for the working of basic functionalities of the website. We also use third-party cookies that help us analyze and understand how you use this website. These cookies will be stored in your browser only with your consent. You also have the option to opt-out of these cookies. But opting out of some of these cookies may affect your browsing experience.
Necessary Always Enabled
Necessary cookies are absolutely essential for the website to function properly. This category only includes cookies that ensures basic functionalities and security features of the website. These cookies do not store any personal information.
Non-necessary
Any cookies that may not be particularly necessary for the website to function and is used specifically to collect user personal data via analytics, ads, other embedded contents are termed as non-necessary cookies. It is mandatory to procure user consent prior to running these cookies on your website.
SAVE & ACCEPT
269 shares