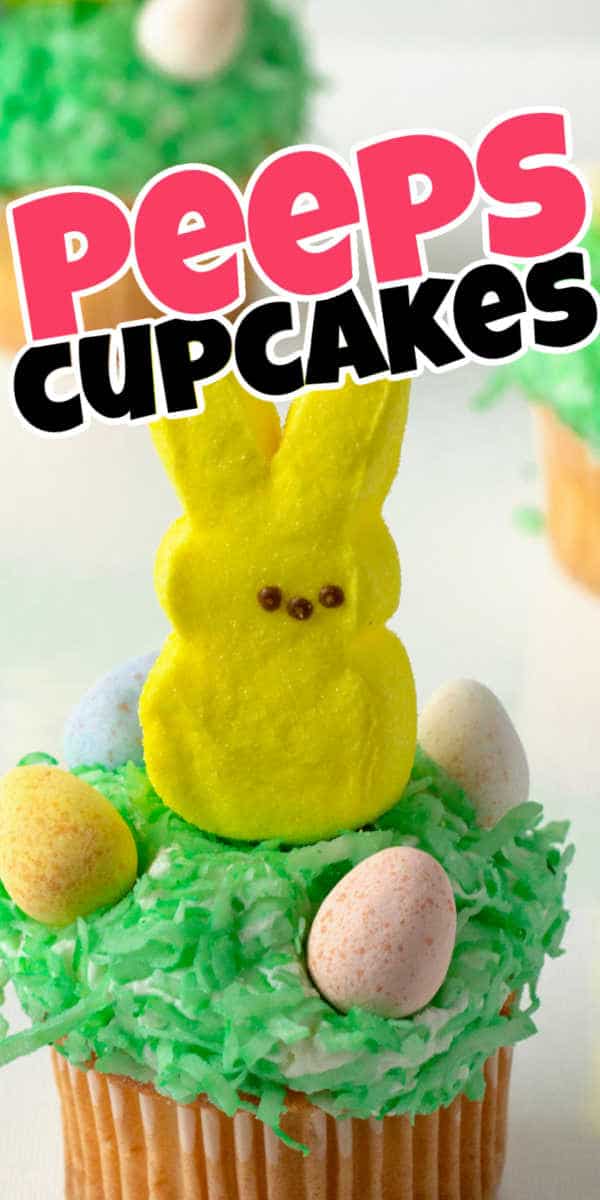 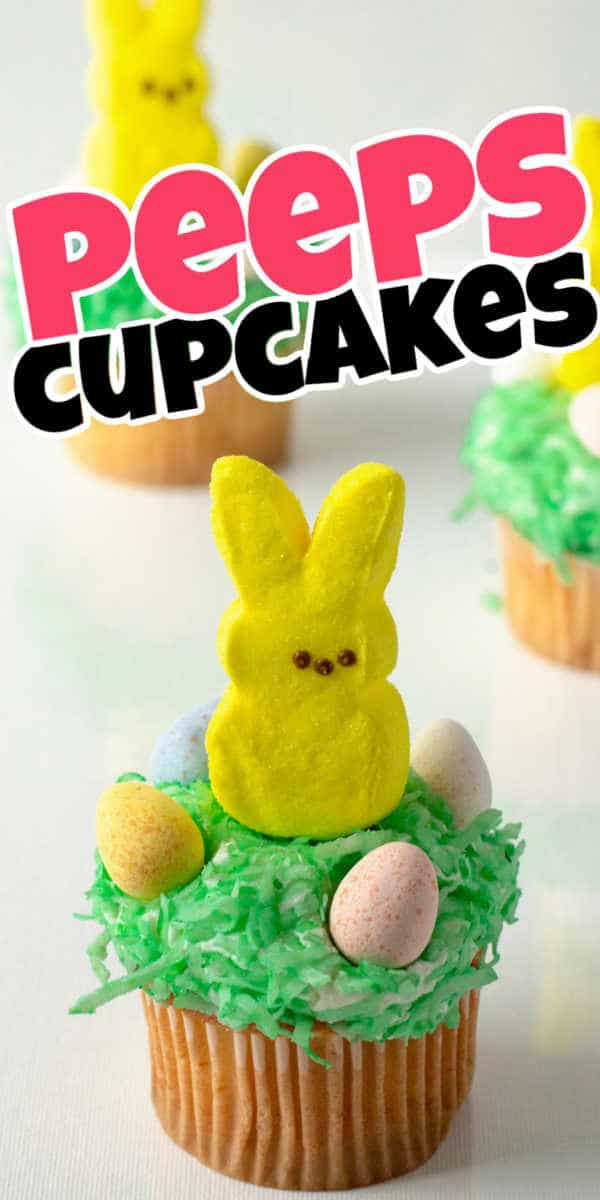 Easter Bunny Peeps Cupcakes are a super easy and festive Easter cupcake that is perfect for any Easter Party! Homemade cupcakes, homemade frosting with some colored coconut topped with an Easter Bunny Peep is all you need to make these Peeps cupcakes!

Hip hop the Easter bunny Peeps cupcake is on its way! Or I should say it will be once you show them to the kids because they will be begging to make these super cute bunny cupcakes! I mean seriously look how stinkin CUTE they are!

These festive Easter Bunny cupcakes are made with made with your favorite cupcakes, homemade buttercream icing, died coconut and a Peep Bunny that are sure to make your easter party a TON of hippity Hoppity fun!

What Variations can you make to these Easter Cupcakes?

Change up the cupcake flavor. When I make these homemade cupcakes I tend to stick with vanilla cupcakes and vanilla buttercream frosting. Not for any reason other than it is my normal and I stick with “normal” often.

Looking for cupcake recipes? Check these out!

Looking for frosting recipes? Check these out!

Color the frosting instead of coconut. If you are not a fan of coconut you can skip that step, however if you are doing that then I suggest dying the frosting green so they look like a bunny sitting in the grass. 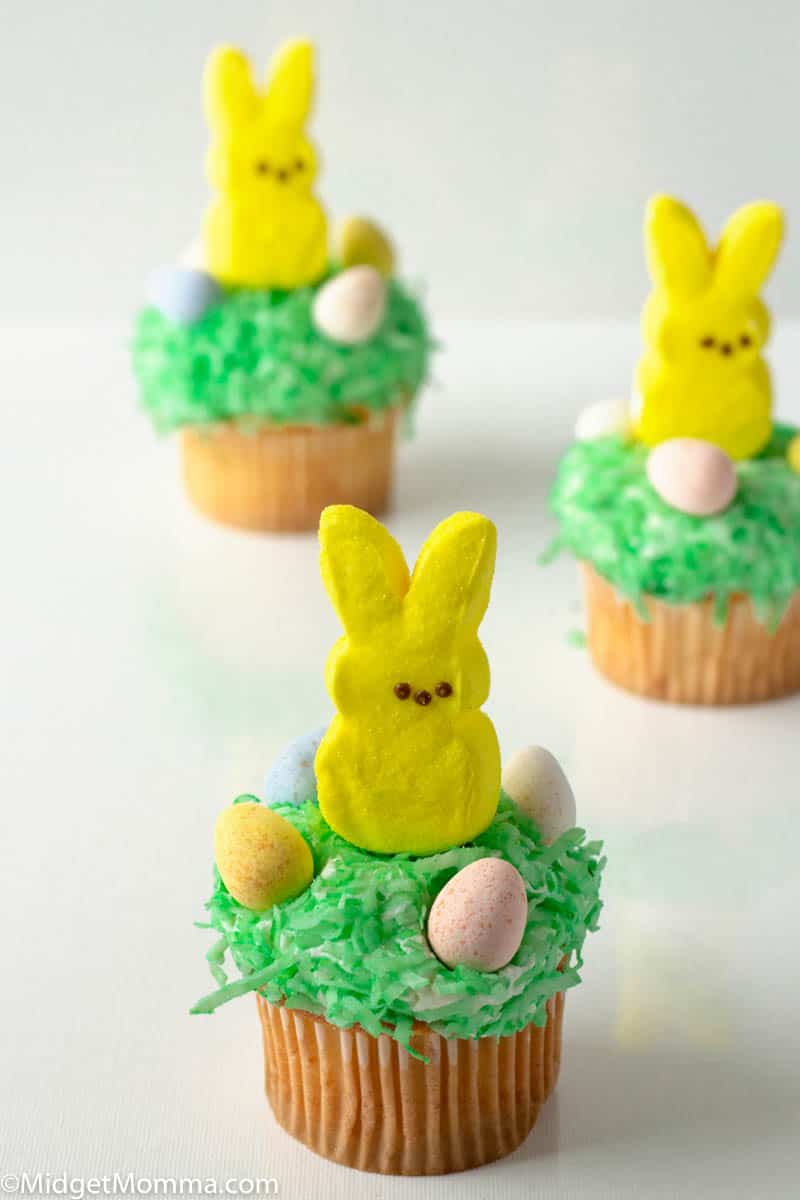 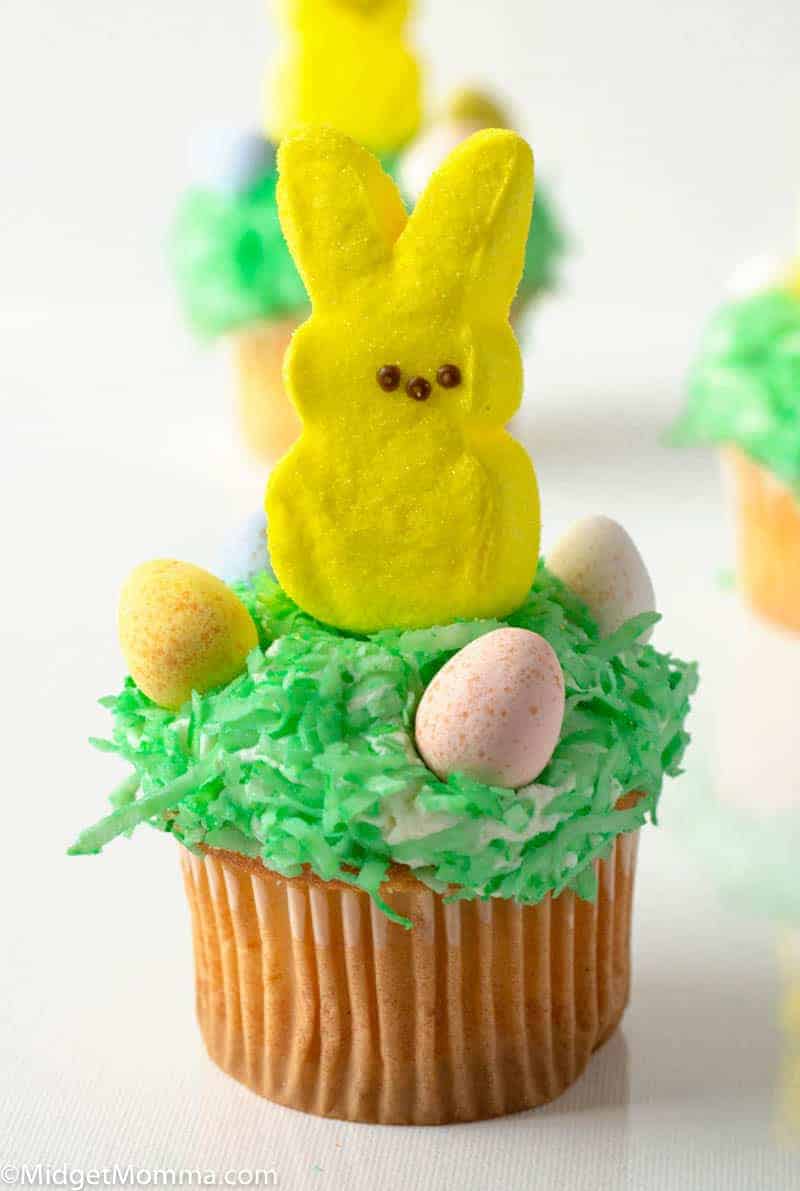 How to Make Easter Peeps Cupcakes

Make cupcakes and allow them to cool completely.

Place coconut into a bowl and add a few drops of food coloring. Mix it up and add more food coloring if you would like a darker color grass.

Fill a piping bag with buttercream and a large icing tip. Take your butter cream and pipe it onto the cupcake.

Then dip each cupcake into the green coconut and press it into the buttercream.

With your thumb press a small spot for the peep to sit and pipe a little buttercream in that spot, this will act as your glue.

Stick the peep into the buttercream. 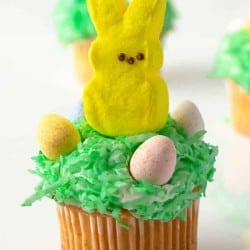 Created by Lauren
No ratings yet
Prep Time 10 mins
Cook Time 20 mins
Print Recipe Pin Recipe Rate Recipe
Easter Bunny Peeps Cupcakes are a super easy and festive Easter cupcake that is perfect for any Easter Party! Homemade cupcakes, homemade frosting with some colored coconut topped with an Easter Bunny Peep is all you need to make these Peeps cupcakes!

How to Make Vanilla Cupcakes

How to Make Vanilla Buttercream Frosting

How to Assemble Peeps Cupcakes 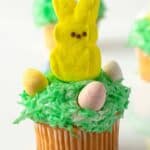 This website uses cookies to improve your experience while you navigate through the website. Out of these, the cookies that are categorized as necessary are stored on your browser as they are essential for the working of basic functionalities of the website. We also use third-party cookies that help us analyze and understand how you use this website. These cookies will be stored in your browser only with your consent. You also have the option to opt-out of these cookies. But opting out of some of these cookies may affect your browsing experience.
Necessary Always Enabled
Necessary cookies are absolutely essential for the website to function properly. This category only includes cookies that ensures basic functionalities and security features of the website. These cookies do not store any personal information.
Non-necessary
Any cookies that may not be particularly necessary for the website to function and is used specifically to collect user personal data via analytics, ads, other embedded contents are termed as non-necessary cookies. It is mandatory to procure user consent prior to running these cookies on your website.
SAVE & ACCEPT
158 shares