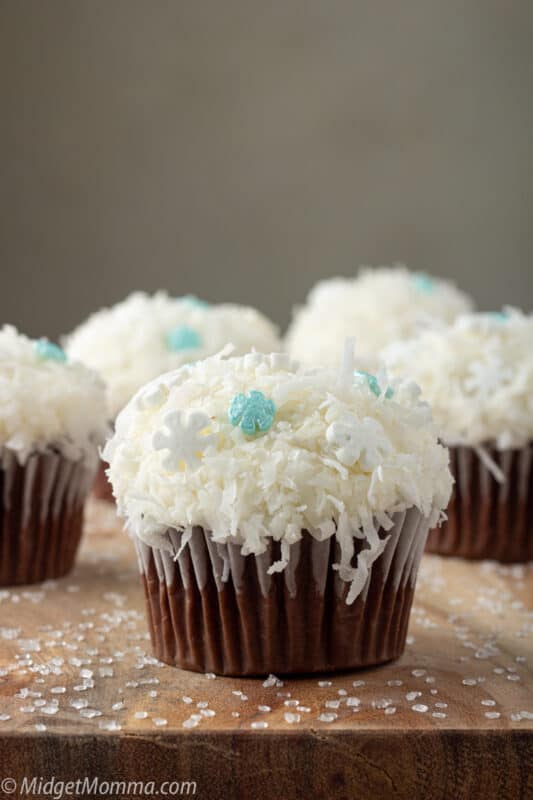 Are you looking for the perfect Frozen Cupcake? Then you are going to love this snowball cupcake that was inspired by the Frozen movie! This easy to make cupcake recipes is the perfect cupcake for any Frozen Movie Fan!

It doesn’t matter how many years it has been since the original Frozen movie came out that the love for the movie still holds true in our house. I originally posted this Frozen Movie Cupcake in 2014 and with the new Frozen 2 movie about to come out I thought it was the perfect time to update the photos.

Looking for more Frozen Movie treats? Check these out!

These Frozen cupcakes are so easy to make and the kids will love them! All you need is your favorite cupcake flavor, homemade buttercream, sweetened shredded coconut, Sanding sugar and Frozen Snowflake sprinkles!

Note, if you do not like coconut you can skip it and just use a lot of the sanding sugar instead. I do not recommended regular sugar because it starts to melt (like Olaf in the summer) once it gets wet with the frosting.

If you are running short on time, use the recipe for how to make a boxed cake taste homemade. If you are wanting to have homemade cupcakes, check out these amazing cupcake recipes!

Variations of this Cupcake Recipe

Change up the frosting.It is important to use white frosting when making these Frozen Snowball coconut cupcakes. You want them to look like a snowball. If you are going to use coconut stick with the vanilla buttercream. If you are only going to use sanding sugar on the cupcakes then any flavor will work.

Change up the cupcake flavor. You can use any flavor cupcake that you want to when making these cute Disney Cupcakes. We have LOTS of different cupcake flavors for you to pick from too!

How to Make Frozen Snowball Cupcakes

Make your cupcakes and allow them to cool completely.

While your cupcakes are cooling make your frosting flavor of choice.

Once cupcakes are fully cooled and the buttercream frosting is done, use a piping bag to pip frosting on to each cupcake.

Next dip the cupcake into the coconut and press it into the buttercream to create a snowball shape.

Sprinkle the top with sanding sugar to make it sparkle and cover the places that do not have coconut.

Add a few snowflake sprinkles into the cupcake randomly. 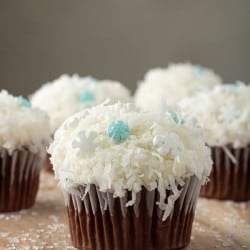 How to Make Frozen Cupcakes 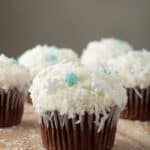 More Cupcake Recipes You will Love

This website uses cookies to improve your experience while you navigate through the website. Out of these, the cookies that are categorized as necessary are stored on your browser as they are essential for the working of basic functionalities of the website. We also use third-party cookies that help us analyze and understand how you use this website. These cookies will be stored in your browser only with your consent. You also have the option to opt-out of these cookies. But opting out of some of these cookies may affect your browsing experience.
Necessary Always Enabled
Necessary cookies are absolutely essential for the website to function properly. This category only includes cookies that ensures basic functionalities and security features of the website. These cookies do not store any personal information.
Non-necessary
Any cookies that may not be particularly necessary for the website to function and is used specifically to collect user personal data via analytics, ads, other embedded contents are termed as non-necessary cookies. It is mandatory to procure user consent prior to running these cookies on your website.
SAVE & ACCEPT
178 shares