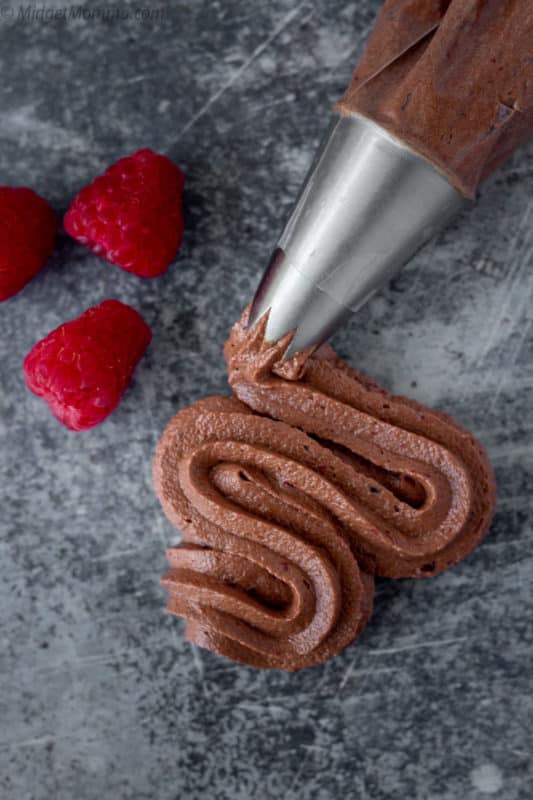 Chocolate Raspberry Buttercream Frosting. Be prepared to fall in love with this amazing homemade buttercream frosting recipe. The combination of chocolate buttercream with fresh raspberries is one that can not be beat! 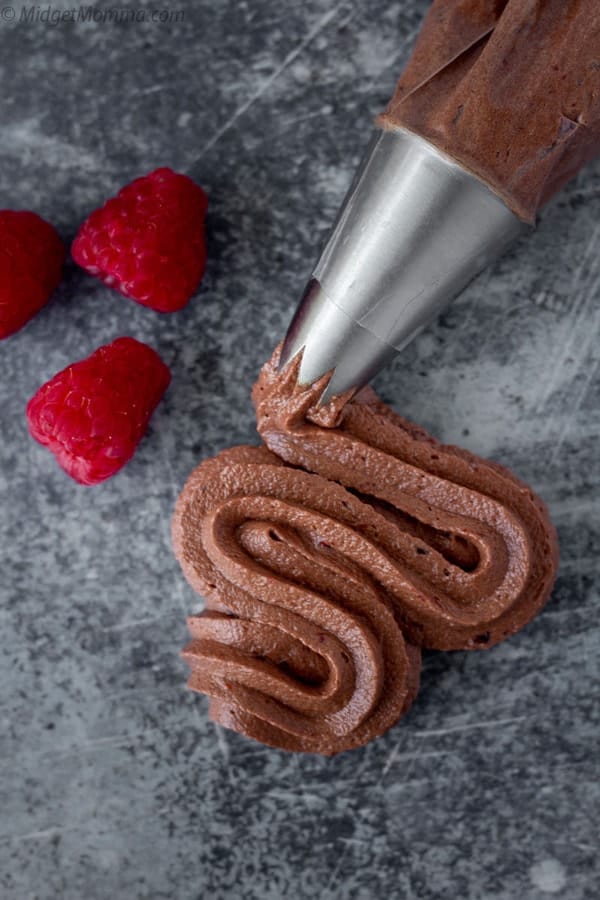 The key to this chocolate raspberry frosting recipes is using a combination of raspberry jam and fresh raspberries. If you just use one or the other it will not have the raspberry flavor since chocolate on its own has such powerful flavor. 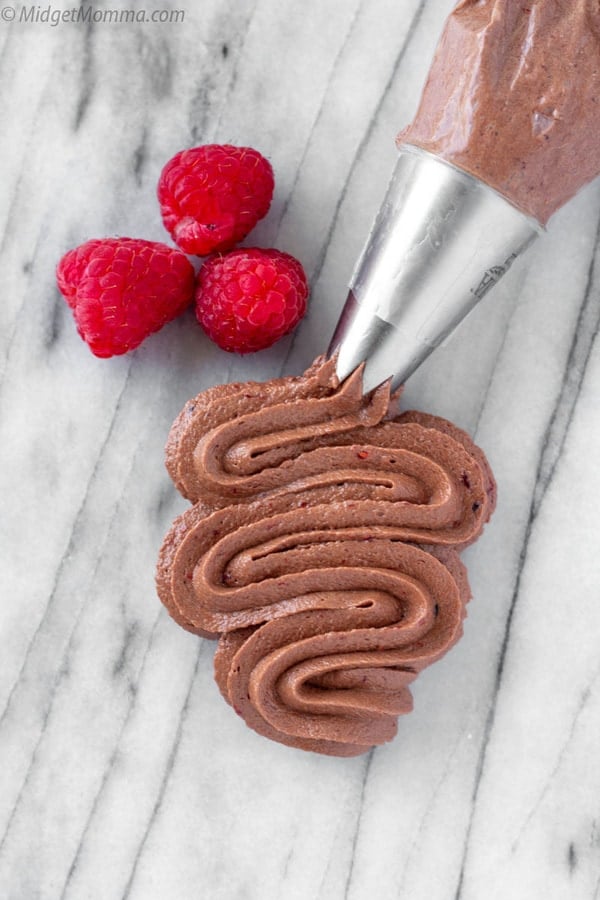 For this buttercream recipe I know that on the off season raspberries can be quite expensive, so I have made this one compatible with fresh or frozen raspberries. Personally though, I try to always stick with fresh raspberries because I like the flavor better but I know that in the off season things can make things more costly. If you use frozen raspberries, they will still give you an amazing buttercream, but you need to make sure they are fully thawed out before using them. 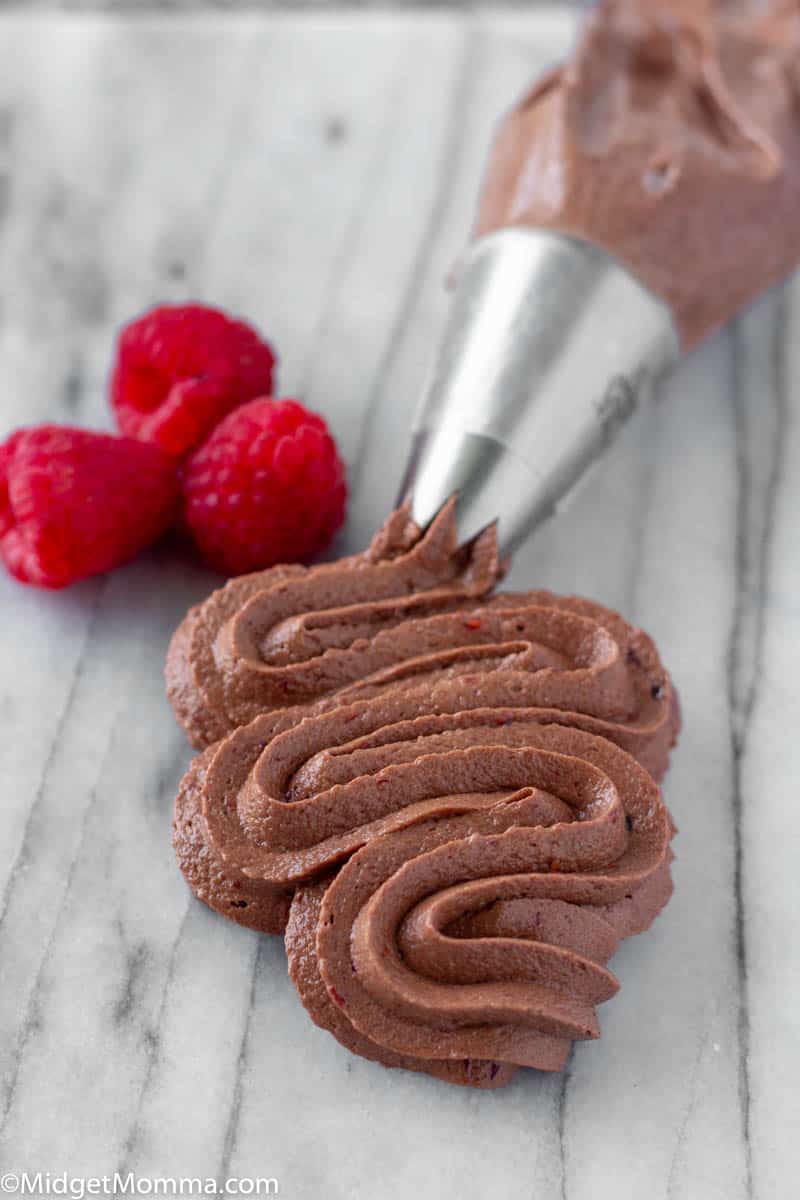 What Cake Flavor to use with Chocolate Raspberry Buttercream?

There are lots of cake flavors that go well with making cupcakes or cake with this chocolate raspberry buttercream, however I normally use chocolate cupcakes or vanilla cupcakes.

Looking for more cupcake ideas? Check these out! 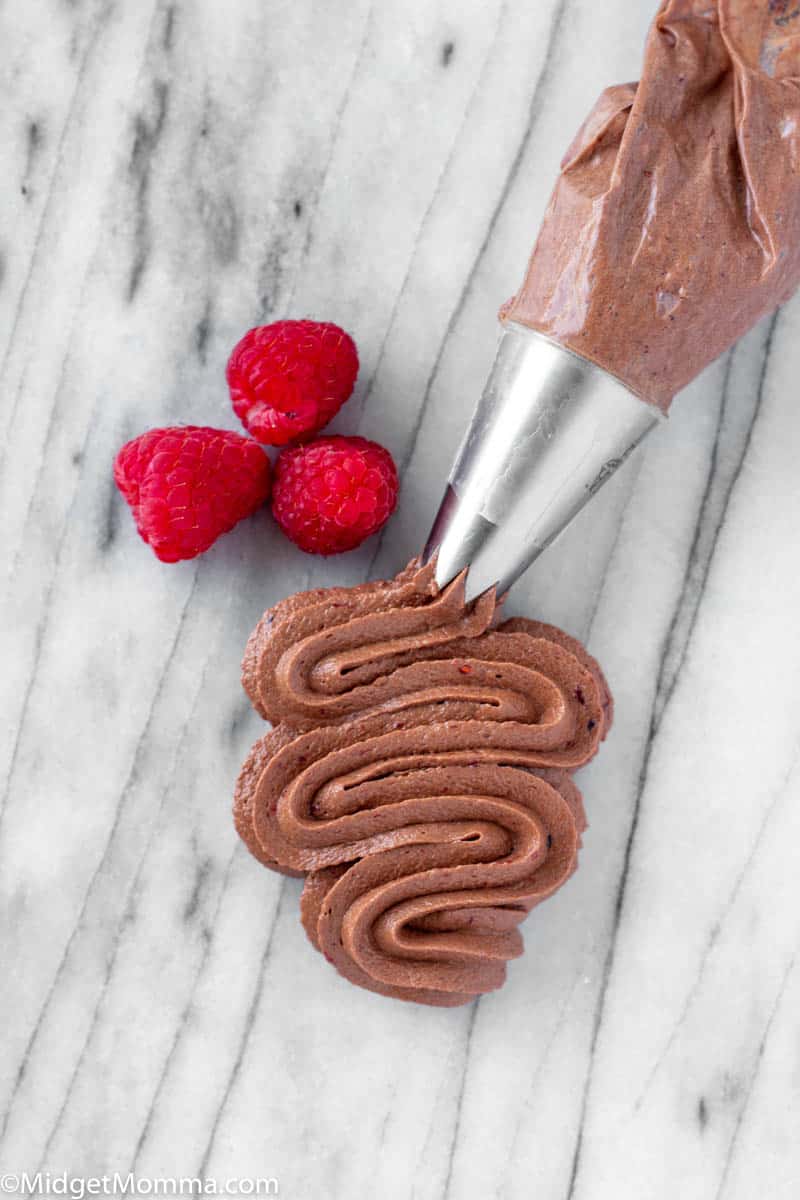 How to Store Buttercream frosting

The buttercream can be stored at room temperature for up to three days or in the refrigerator for up to two weeks.

How to rewhip buttercream frosting after storing

When you bring it out of the refrigerator let it sit at room temperature for two hours. Then re-whip it for ten minutes to bring it back to life.

Can you Freeze Buttercream Frosting?

You can freeze chocolate buttercream frosting for up to 3 months.

How long can buttercream frosting sit out?

I store my buttercream in the fridge and then rewhip it when I want to use it. If you have already frosted a cake or cupcakes this buttercream frosting can sit out for up to 3 days.

How many days in advanced can I make Buttercream frosting?

If you are going to be using this homemade frosting to decorate cupcakes there are lots of easy ways that you can make your cupcakes look just like the ones you get at a bakery.

If you are using different flavored frostings and want them both on top of your cupcake swirled together, check out how to swirl two icing flavors. If you want to layer your frosting flavors, check out the layered frosting swirl!

If you are going to use this frosting to frost a cake, you can frost it however you would like. This frosting also makes a great filling for cakes as well. 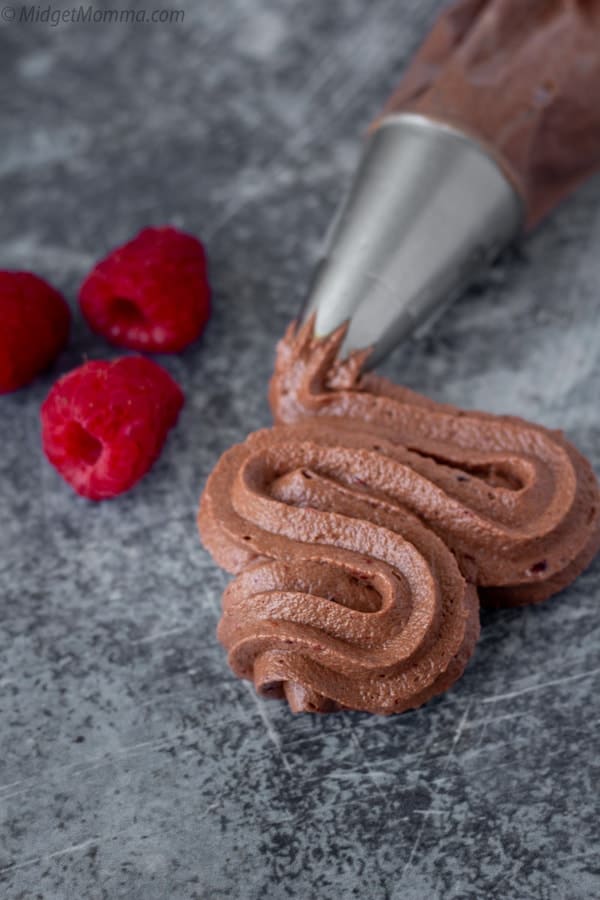 How to Make Chocolate Raspberry Buttercream

In the bowl of your stand mixer add the butter and beat until nice and creamy.

Once creamy and fluffy turn mixer speed to the lowest setting and slowly add the powdered sugar and cocoa powder.

Turn the mixer onto medium-high speed and continue mixing for 10 minutes until light and fluffy. 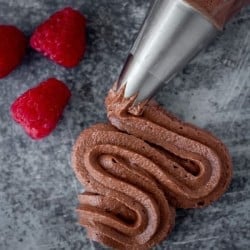 Created by Lauren
4.31 from 23 votes
Prep Time 5 mins
Cook Time 15 mins
Print Recipe Pin Recipe Rate Recipe
Chocolate Raspberry Buttercream Frosting. Be prepared to fall in love with this amazing homemade buttercream frosting recipe. The combination of chocolate buttercream with fresh raspberries is one that can not be beat!

This frosting recipe will make enough frosting to frost 24 cupcakes or an 8 inch round cake. 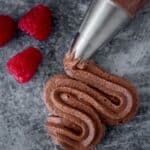 This website uses cookies to improve your experience while you navigate through the website. Out of these, the cookies that are categorized as necessary are stored on your browser as they are essential for the working of basic functionalities of the website. We also use third-party cookies that help us analyze and understand how you use this website. These cookies will be stored in your browser only with your consent. You also have the option to opt-out of these cookies. But opting out of some of these cookies may affect your browsing experience.
Necessary Always Enabled
Necessary cookies are absolutely essential for the website to function properly. This category only includes cookies that ensures basic functionalities and security features of the website. These cookies do not store any personal information.
Non-necessary
Any cookies that may not be particularly necessary for the website to function and is used specifically to collect user personal data via analytics, ads, other embedded contents are termed as non-necessary cookies. It is mandatory to procure user consent prior to running these cookies on your website.
SAVE & ACCEPT
1870 shares